The government won't be signing off on a vast increase in the number of speed cameras, unless they're well sign-posted. 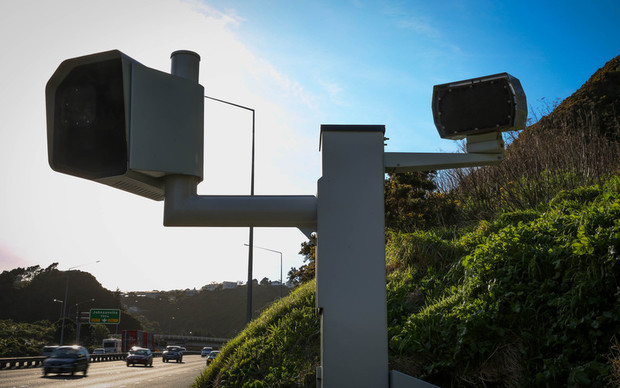 The government has been advised to adopt the Swedish method of speed camera use, which would mean hundreds more cameras and much larger fines. Photo: RNZ / Alexander Robertson

Yesterday, RNZ revealed the government has been advised to look into adopting the Swedish method of speed camera use, which would mean hundreds more cameras and much larger fines.

Critics of the plan say it would be a revenue grab, but Associate Transport Minister Julie Anne Genter said a perfect camera system wouldn't generate a cent.

"We want any policy around speed limits and enforcement to back up that it's about saving lives, it's not about stinging motorists with fines for no reason," Ms Genter said.

"In an ideal world, we would not collect any revenue from speeding fines."

The Speed Reference Group was one of five looking into different parts of the road safety debate.

They said the government should investigate using the Swedish model of speed cameras, when it replaces the current Safer Journeys road safety strategy next year.

Sweden will soon have more than 3000 speed cameras on about 9000km of road.

Ms Genter said it would be crucial to warn motorists if more cameras were installed.

"Certainly, I would not consider it appropriate to massively increase the number of speed cameras, unless we were taking the approach of insuring they were very well sign-posted and only targeted to the most dangerous roads."

She said that would be a model worth investigating.

The National Party's transport spokesperson, Paul Goldsmith, said he was open to more cameras but not to the extent that Sweden has.

"I'm not opposed to the idea of more speed cameras, particularly if they're sign-posted," Mr Goldsmith said.

"They encourage people to slow down and keep to the speed limit.

"It's a good idea [But] I'm not sure about thousands."

Mr Goldsmith said he had not seen any evidence of the effectiveness of speed cameras, but he believed they did slow drivers down.

"I assume that an element of speed cameras does help change behaviour, particularly if they're sign-posted," he said.

"But you have to weigh that up in terms of expense, about other things that you could do such as enforcement around wearing seatbelts, and not drink driving and other important elements of the road safety message."

Mr Goldsmith said cameras should not be prioritised ahead of roading improvements, which he said was a key part of Sweden's roading network.

He said Sweden has more than 8000km of motorways and expressways.

Sweden also runs its camera network through its version of the Transport Agency, a move that police are eager to see happen here.

Sir Brian Roche is the new chair of the NZTA board, and said they would step up to the challenge if asked to take over the cameras.

"If the policy decision is that they become the custodian of the speed cameras, then that is what we're going to do," Sir Brian said.

"I don't have any lack of confidence in the agency's ability to respond to new tasks required of it.

"If the decision is made that speed cameras move to NZTA, then so be it, we will do the task."

A decision on the future home of the speed camera network is expected to be made in the coming months.

The government's new road safety strategy will be open for consultation later this year and will begin in 2020.