A seventh kākāpō being treated for the respiratory disease aspergillosis has died.

Nora 1-A was just over 100 days old and was the sickest of the kākāpō being treated at the New Zealand Centre Conservation Medicine at Auckland Zoo.

There was no hint of just how unwell she was when RNZ visited the centre yesterday afternoon, as she playfully tugged at the towel she was wrapped in.

That is a major problem with aspergillosis - a fungal disease which infects the respiratory system - birds can seem perfectly all right until it's too late to save them.

Yesterday Auckland Zoo's head of vet services James Chatterton said she needed surgery to remove an abscess in her airway.

"In the last few days, her symptoms have deteriorated and so she sounds like she's choking to death. Without wanting to be too melodramatic, that's exactly what's going on."

There are now 35 kākāpō in three hospitals around the country, getting close to a fifth of the total population.

Mr Chatterton said with seven deaths so far the kākāpō is facing a major threat.

"That's getting on to 20 percent of the population, so about a fifth of the birds that exist are in veterinary hospital somewhere. So it's a really significant and unprecedented problem."

The birds at the conservation hospital are being housed in purpose-built pens in temperature-controlled, bio-secure rooms.

They're being provided with their favourite native plants to eat and are medicated twice daily.

Mr Chatterton said some of the birds face many months of treatment before they are able to return to their island homes. 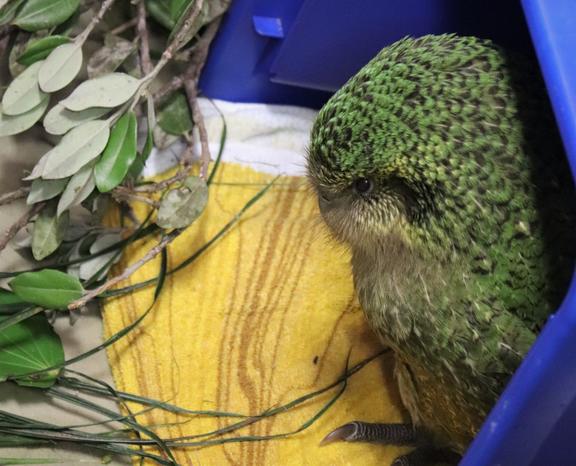 Esperance 2B is one of the kākāpō receiving treatment for aspergillosis, which has been spreading among the population Photo: Supplied / Auckland Zoo

"All the staff in kākāpō recovery put their heart and soul into protecting this species but part of our job as a vet team is to try and maintain a bit of a professional distance because there are going to be tough times ahead, and there's already been tough times recently.

With the help of the Department of Conservation-led Kākāpō Recovery Programme, the birds have had a record breeding season, with the 86 chicks hatched over summer bumping the population up by 50 percent.

"They're an credible species and it's amazing to work with them. We're all fighting for them at the moment as much as we can to really try and save them," said the hospital's clinical co-ordinator, Mikaylie Wilson.

"Everyone's quite worried and ... working long days and trying to pull people in from everywhere. It's quite intense being out there as well when you've got so many sick birds in front of your face."

Shortly after RNZ's visit, there was news from James Chatterton at the zoo that Nora 1-A had died during the surgery.

"If we didn't take action she was - for sure - going to die. We also knew that the treatment she was facing had a low chance of success because the disease was so severe," Mr Chatterton said.

"And it would have meant she had to go through multiple anaesthetics over the next two weeks and if she was too weak to survive today, I feel sure that the disease was too severe for her to recover from at all."

Nora 1-A's death is the first for a month. A full autopsy will be performed to confirm she died from aspergillosis.