Brain surgery has saved the life of a young kākāpō chick - one of the rarest birds in the world - that was born with a condition the lead surgeon says they've never seen in any bird before. 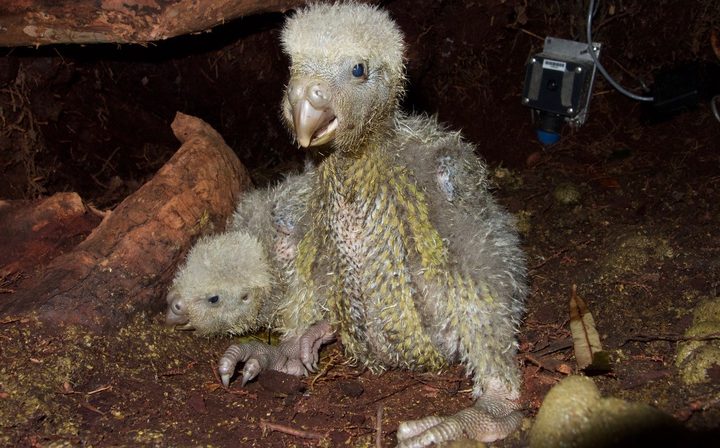 Two kākāpō chicks that are nearly a month old, thriving in a nest on Anchor Island in Fiordland. Photo: Andrew Digby / DOC

Professor Brett Gartrell led the procedure a couple of weeks ago, and said the chick called Esperance 1B had hatched this season with a developmental disorder where the skull never fused properly over the brain, a condition that's extremely rare in birds.

"In fact we've never seen it before in any bird let alone a kākāpō," he said. "It's what we call a developmental disorder, so as the chick is forming in the egg something goes wrong with the way that the skull is being fused."

"This chick for one reason or another we didn't see that fusion of the skull plates, and what that means is that the pressure inside the brain pushes part of the brain and the lining that surrounds the brain - called the dura - out, outside the skull ... that meant the skin didnt' seal outside the top so that all that was between this chick and the outside world was this thin little membrane of the dura.

"So, any damage to that could have had a catastrophic impact."

#kakapo chick Esperance-1-B-19 in Esperance's nest a few weeks ago. This chick is now on the mainland, undergoing treatment and tests for an issue with its skull. #kakapo2019 #conservation #parrots pic.twitter.com/w32zhpXlPs

The bird had seemed to be doing okay with its brain bulge, but the decision was made to operate now rather than risk injury later.

Prof Gartrell said a nationwide team of vets from Auckland Zoo, Wellington Zoo and Dunedin Wildlife Hospital all pitched in to lend their expertise. They adapted surgical techniques from human medicine used for things like brain hernias.

"We changed them slightly for the anatomy that we were dealing with," he said. "We had to dissect away the skin from around that herniated brain tissue ... our initial plan was to see if we could get that brain tissue back inside the skull and then we would seal it over."

They ran into complications, however.

"When we started to push on that, we were putting too much pressure on the brain for that to be a viable option so we had to make the rather scary decision during the surgery to acutally remove that section of the brain," Prof Gartrell said.

"Once we'd done that we still saw the pressure within the brain pushing out and pushing the tissue within the skull, so we then sewed in a mesh graft and tied it down by suturing it into the skull so that it forms like a firm trampoline which keeps the brain inside the skull."

He said such measures would not have been taken for a sparrow, but working with such a rare parrot to help conserve the species was a privilege.

"Being given the opportunity to be able to help a kākāpō chick is of course an extraordinary privilege and opportunity and we are very grateful for the trust that the kākāpō team has put into our hands by allowing us to do this procedure.

"Our [Dunedin Wildlife] hospital is set up to do native wildlife only, and we do these kind of things because we're tying to provide veterninary services to conservation in New Zealand."

The chick was one of 86 that hatched this season, the longest and most successful breeding season on record.

Find the full kākāpō story in the book Kākāpō - rescued from the brink of extinction by Alison Ballance (2018).