There is good news as well as sad news from the kākāpō islands. Hoki, the first hand-reared kākāpō, has died from a fungal infection, while a surprise third nest from the female Solstice boosted overall egg numbers to 252.

Of 86 kākāpō chicks that hatched this breeding season, 77 are still alive.

There is a wide age range of chicks: the youngest chicks are less than two weeks old, while the oldest chicks are fledging and leaving their nests. 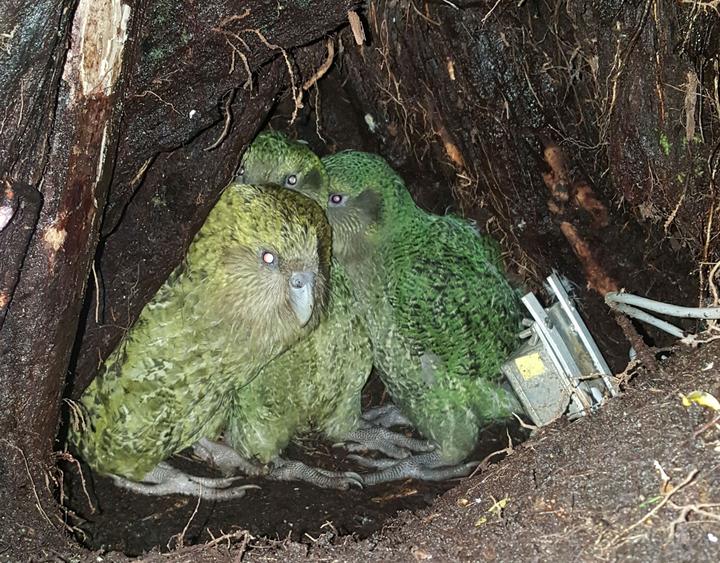 With the sad loss of 27-year-old female Hoki, the adult kākāpō population is now 146 birds. Hoki died from a severe aspergillosis fungal infection in her lungs.

A surprise third nest from Solstice, discovered on Easter Friday, brought the total number of eggs laid this season to 252. Unfortunately the three eggs were all infertile.

One hundred and eighteen eggs were fertile, and 86 chicks hatched.

There are currently 77 chicks alive.

Seventy three chicks have been sexed, and there are 38 males and 35 females. Of the chicks with Fiordland genes, Kuia’s second clutch are males, while Gulliver and Suzanne’s clutch includes one female and two males.

There is a wide age range of chicks. Sixteen of the oldest chicks have fledged and left their nests, while the youngest chicks, from Stella’s second clutch, are still less than two weeks old.

The eight hand-reared chicks are currently in weaning pens on Whenua Hou, learning how to survive in the bush.

Four chicks and the adult male Arab are currently receiving vet care at Auckland Zoo and the Dunedin Wildlife Hospital. 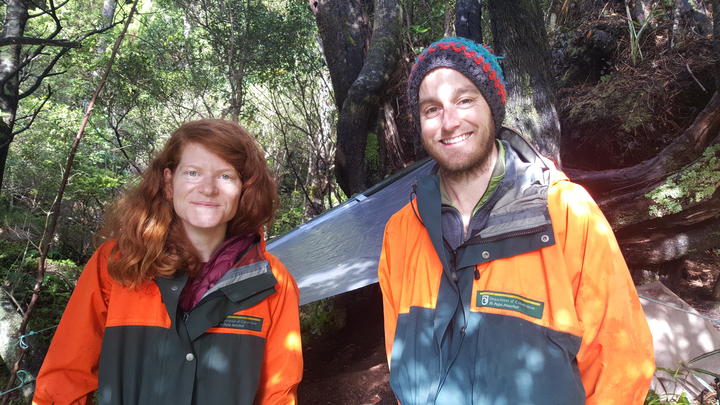 Anchor Island kākāpō rangers Sara Larcombe and Brodie Philp, in front of Yasmine's nest which is protected from the rain with a tarpaulin. Photo: RNZ / Alison Ballance

Chick Queenie-3-A has been taken off Anchor Island as it is experiencing issues with the leg that it broke when it was three days old.

Waikawa-4-B is being treated for a respiratory issue.

Esperance-1-B has had brain surgery to treat the brain hernia where its skull plates hadn’t joined properly.

Auckland Zoo vets are still deciding what to do with the damaged eye of the adult male Arab.

The death of the founder male Arab, from surgical complications, brings the adult kākāpō population to 145.

DOC's Kākāpō Recovery Programme senior technical officer says that the female Solstice is now fostering the chick Kuihi=3-B. This is the first time she has raised a chick and Daryl says she is feeding it well.

The female Tiwhiri has mated for a second time with Ngatapa on Anchor Island. If she nests she will be the second female this breeding season to nest three times (Solstice was the first), and it will be considerably later than any other previous nesting attempt.

Another adult death -- the founder male Gumboots, from an accident - brings the kākāpō  population to 144.