The beer drinking habits of early Marlborough have been unearthed by construction of a new bridge.

The transport agency says the new $21 million bridge in Blenheim is on track for completion next year, which will replace the historic Ōpaoa Bridge.

The Ōpaoa River (formerly spelled as Opawa) Bridge, or Grove Road Bridge, was built between 1915-1917 as the first concrete bowstring arch design in New Zealand.

It has a category-one heritage listing, but was now too narrow for modern trucks and vehicles to safely pass. However, its distinctive arches, which have led locals to name it the "Banana Bridge", will not be disappearing.

The bridge will be kept as an accessway for walkers and cyclists.

A transport agency project manager Andrew Adams, said it was while they were doing early excavation work for the new bridge that they came across piles of old glass bottles.

"In the early days of construction when we were stripping the topsoil and digging for both abutments the workers came across some glass bottles, which looked quite old."

Mr Adams said protocol meant they had to stop work and call in the project archaeologist, who by luck was based in Blenheim.

"She was able to get here within five minutes. Some of these bottles dated back to the late 1800s ... right up to present-day empty bottles of Speights."

Mr Adams said the bottles revealed some favourite tipples of presumably early stage-coach drivers and passengers who possibly turfed them out in the river on their journey.

Sadly, the habit appeared to have remained, he said.

The bridge under construction now was the third built over the river. 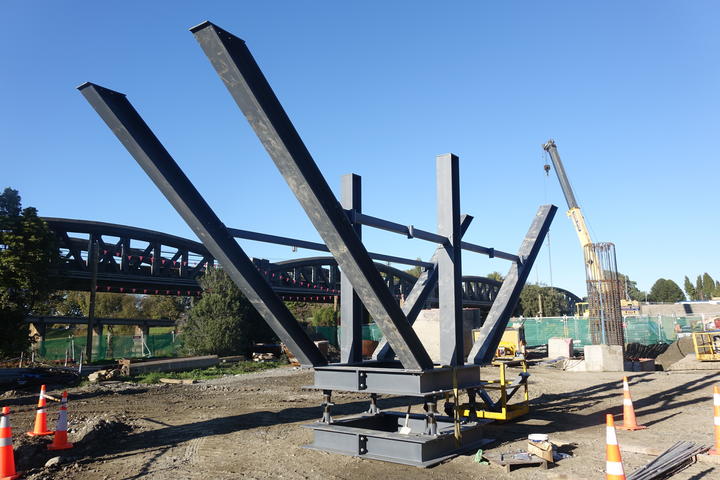 The transport agency says a new $21 million bridge in Blenheim is on track for completion next year, that will replace the historic Ōpaoa Bridge. Photo: RNZ / Tracy Neal

Christopher Cookson wrote in Marlborough Online that the first bridge built over the Ōpaoa River was in 1869, but it collapsed in 1878. Until the current bridge was built, traffic had to cross the river by boat, or by using a rail bridge.

The 170m concrete bridge was designed by John Dudley Holmes for the New Zealand Public Works Department before World War I. Construction began in 1915, but war delayed its completion.

The bridge at the northern entrance to Blenheim was an important freight route between there and Christchurch. It was severely tested in the 2016 Kaikōura earthquake, which damaged buildings and bridges throughout Marlborough.

"We're in a very seismically active zone, so the bridge has been designed to the highest seismic standards today.

"Because it's alongside a river the potential for liquefaction is very, very high."

He said the 2m diameter piles, which were full of reinforced steel, had gone down 26 metres deep into the ground.

The Transport Agency said months of fine weather had allowed construction to stay on track, with an opening date scheduled for mid-next year, and would include road realignment and landscaping.