The men who survived a helicopter crash in the subantarctic ocean have spoken about how they survived, saying their training kicked in seconds after the crash.

Pilot Andrew Hefford, winch operator Lester Stevens and medic John Lambeth had been on their way to medically evacuate a person from a fishing boat when their Kawasaki BK-117 helicopter crashed on Monday night.

The men were found on Tuesday morning on a beach on Auckland Island, about 450km south of New Zealand. They were wearing survival gear and lifejackets when the helicopter went down 3km from the islands, and managed to get ashore where they made a shelter to keep warm until help arrived.

On the remote island, huddled together for warmth as a front closed in, the crew of the crashed helicopter said they never lost hope they would be found.

St John paramedic John Lambeth recalled the moments after their helicopter crashed into the water.

"I can admit there was ... a few seconds of sheer panic there. Released myself, I floated up and hit into an object up above me," Mr Lambeth said.

Initially he thought he was going to drown, he said, but his training kicked in and he relaxed, moving towards the rear of the helicopter, where he saw the limp form of his friend.

"Lester, beside me here, was unresponsive lying in the helicopter, in the back of it filling up with water."

Mr Lambeth pulled him out and back to the surface.

"By that time, the helicopter was gone."

Without his help, Mr Stevens is unlikely to have survived. 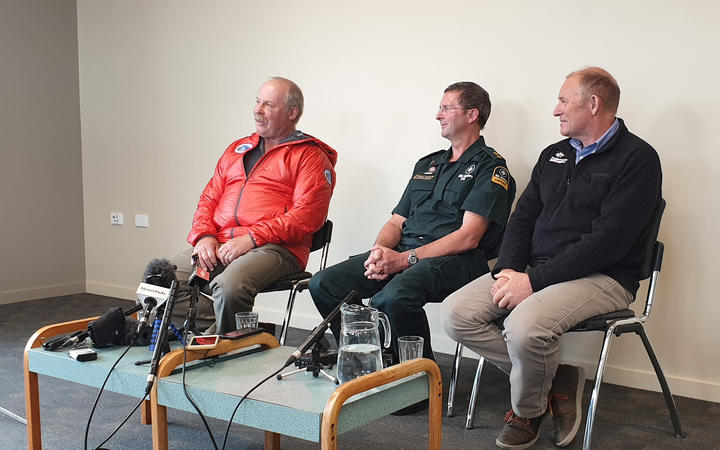 Mr Stevens, who broke his nose and was temporarily knocked unconscious, said he had quite a different experience to the other crew members at the start.

"Well comparatively my experience was very relaxed," he said, drawing laughter from journalists and family seated in front of him.

"I can't recall anything until I woke up on my back in the water and someone was saying something about swimming, and I wondered what the hell they were talking about really. I had no idea where I was or why I was swimming at that stage."

Once they escaped the helicopter, their struggle was far from over, as they began to swim towards shore, helping Mr Stevens who had also injured his shoulder.

Then it took hours to navigate the slippery kelp and rocks below the cliffs face before they could find a way to higher - and drier - ground.

They found a hollowed out log, cutting ferns to create a buffer from the cold ground and hunkered down together for a long cold night without food or water.

But pilot Andrew Hefford said it was reassuring knowing people were out searching for them.

They could hear the Defence Force Orion plane overhead as it conducted radar sweeps on Monday night.

"We did jump out and try and flash the torch up in the air ... Did that a couple of times when they passed over, but in the end we thought no point getting up all the time," Mr Hefford said.

He tried to add a bit of comfort to the night - with limited success.

"We had our lifejackets on, but we didn't inflate them. I'm kinda glad we didn't, they would have been a hindrance as we found out later on in the night when I inflated mine to use as a pillow. It very near strangled me," Mr Hefford said.

The next morning, they moved down onto the beach, where they were found Southern Lakes Helicopter owner Sir Richard Hayes.

"It was a very nice feeling. They jumped out of the helicopter, came and, yeah, hugs all round. Never thought I'd get a hug off my boss, but there you go."

They were all discharged from hospital earlier in the week - Mr Stevens with a broken nose and torn ligaments in his shoulder, Mr Hefford with a fractured T12 and Mr Lambeth with fractured ribs.

Throughout it all, Lester Stevens said their families were never far from their thoughts.

The crew was concerned that their families would be worried sick because they were fearing the worst, he said.

Mr Stevens said the group knew early on that they were extremely lucky, but they had to be patient.

The combination of strong winds and sea noises made sounds like rotor-blades, but eventually they were real, he said.

"There was a fairly big sea running off in one direction and the wind blowing, and every now and then it combined to sound of a helicopter engine, which all of us heard several times, possibly due to wishful thinking. But eventually it turned out to be real, so that was great."

He said they were heartened to hear sounds of the Defence Force Orion plane and helicopters searching for them. A fishing boat had spotted a door from the helicopter which helped narrow down the search area. The men were flown to Invercargill and walked unaided into Southland Hospital for checkups.

Their ordeal hasn't deterred any of them from getting back into a rescue chopper.

All three say they will return to the skies once they get medical clearance.

The cause of the crash is subject to three investigations by the Transport Accident Investigation Commission, Civil Aviation Authority and aircraft owners Southern Lakes Helicopters. The three men were interviewed earlier this week by Commission investigators.