An eight-metre tall Māori carving has been erected on the grounds of a battlefield near Passchendaele where thousands of New Zealanders were killed during World War I, fulfilling the dream of one Flemish resident. 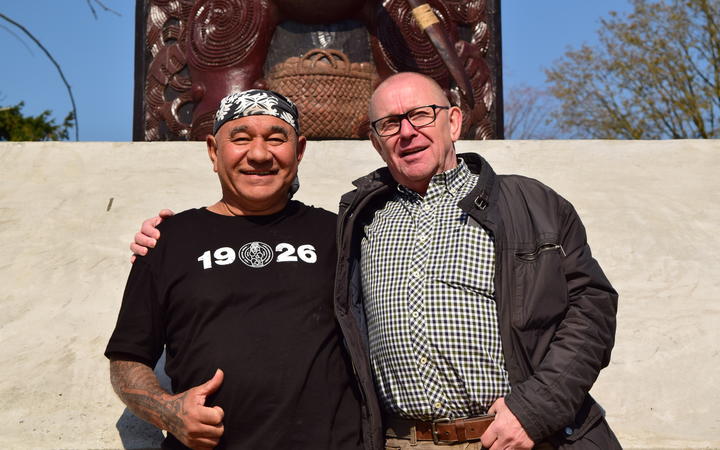 Master carver James Rickard with Freddy Declerck, who has spent more than a decade raising awareness about New Zealand's role in the Battle of Passchendaele and the Western Front. Photo: Supplied / George Driver

The pou maumahara (memorial carving) was installed on 15 April in Passchendaele Memorial Park in Zonnebeke, between Ypres and Passchendaele, in Belgium. It will be officially unveiled on Anzac Day to commemorate Māori and other New Zealanders who served in the war.

During World War I, 2227 Māori served in the Māori Pioneer Battalion, of which 336 died on active service and 734 were wounded. The battalion carried out logistical and construction tasks on the Belgian battlefields, digging trenches and building roads and light railway lines, often under heavy shelling.

Māori also served in other units and were among the 18,058 New Zealanders killed during the war.

The monument was carved at the New Zealand Māori Arts and Crafts Institute (NZMACI) in Rotorua, but the project was driven by one dedicated Belgian.

Freddy Declerck, who grew up on the battlefields of Flanders, has spent more than a decade raising awareness about New Zealand's role in the Battle of Passchendaele and the Western Front.

He said he developed a deep affection for New Zealand while studying to become a World War I guide. 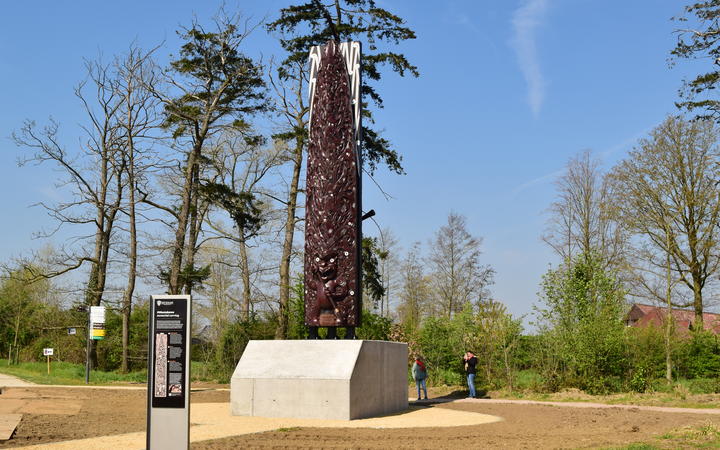 The monument was carved at the New Zealand Māori Arts and Crafts Institute (NZMACI) in Rotorua. Photo: Supplied / George Driver

A former chair of the Memorial Museum Passchendaele 1917, he helped develop two exhibitions which toured New Zealand and Australia in 2009 and 2017, entitled The Belgians Have Not Forgotten. He also founded the New Zealand Pilgrimage Trust, which helped New Zealand schools and other groups visit the Flanders battlefields. He was named an Honorary Member of the New Zealand Order of Merit in 2015 for his work.

He said the idea for the monument took form in 2017, while he was guiding a group of Māori and Pacific Island Anzac descendants in Flanders.

"I took them to the Passchendaele Memorial Gardens [in Zonnebeke] and said 'wouldn't it be great to have a Māori carving at the beginning of the gardens, like at the entrance of a marae'," Mr Declerck said.

A couple of the descendants put him in touch with the NZMACI and he visited the institute later that year. By chance, NZMACI was already creating a World War I commemorative carving for Gallipoli, but after talking with Mr Declerck it was decided Zonnebeke would be a more fitting location.

He secured funding from the Zonnebeke Municipal Authority to install the monument, while the New Zealand Government paid for it to be transported to Belgium. 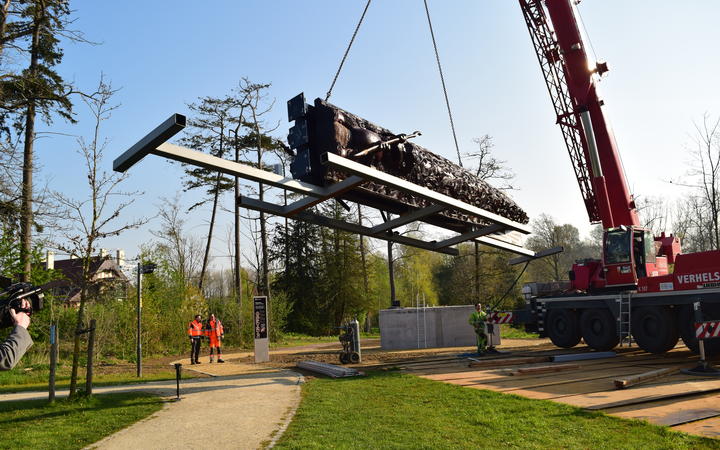 The pou maumahara, installed on 15 April in Passchendaele Memorial Park in Zonnebeke, will be officially unveiled on Anzac Day. Photo: Supplied / George Driver

Two years on, after seeing the monument finally erected, a teary-eyed Mr Declerck said he hoped it would make New Zealanders proud.

"It's very moving to finally see it standing. What else could you wish for?"

Designed by NZMACI master carver Clive Fugill, the pou maumahara was carved by master carver James Rickard along with tutors and students over four years. 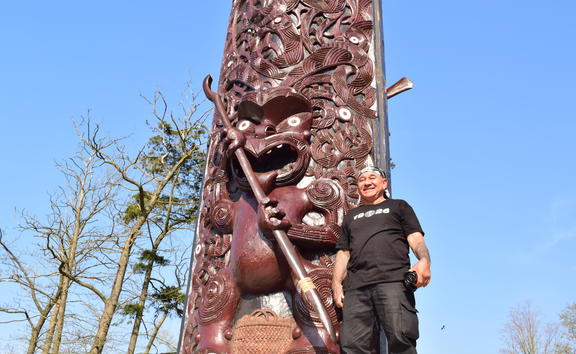 While in Belgium he toured the battlefields with Mr Declerck and discovered the graves of his relatives who had been killed nearby.

Mr Rickard also held a carving workshop for Flemish locals, an experience which he said cemented his connection with the Belgian people.

New Zealand Ambassador to Belgium Gregory Andrews was at Zonnebeke when the monument put up and said it was a fitting commemoration. 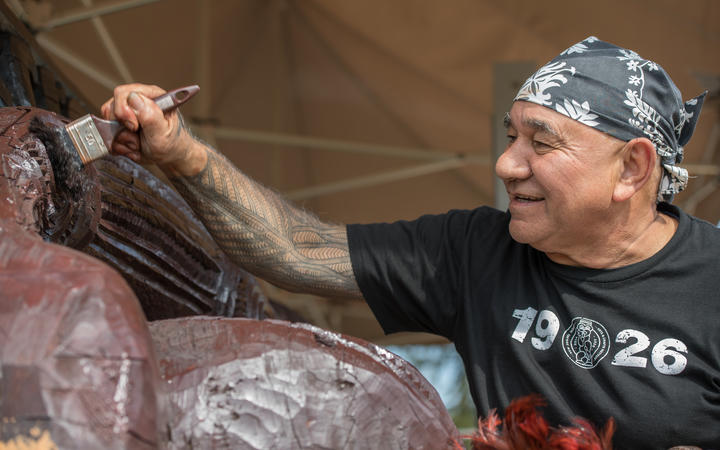 The pou maumahara was carved by master carver James Rickard along with tutors and students over four years. Photo: Supplied / Eric Compernolle

"It's an incredible honour to have a piece so identifiably New Zealand in the heart of Passchendaele to tell the story about Māori in World War I," Mr Andrews said. "To end the centenary period with this monument, which will be here for people to see for ever, is incredibly moving.

"It shows the connection between Belgium and New Zealand is strong and enduring.

"This is also the first time the role of Māori in the First World War has been recognised in this way in Europe."

The pou maumahara was carved from 4500-year-old swamp kauri laminate and weighs six tonnes. Its two sides represent Tūmatauenga (war), which faces a Passchendaele battlefield where hundreds of Anzac's were killed, and Rongomaraeroa (peace), which faces south-east, towards New Zealand.

In total, more than 4600 New Zealanders died in Belgium on the Western Front in World War I, nearly double the number killed in Gallipoli (2779).

The Battle of Passchendaele in 1917 was one of the most disastrous battles of the war for New Zealand, when 1796 people were killed.

The worst day of the battle was on 12 October - 843 New Zealanders were killed and 1860 were wounded in about four hours that morning. It remains the worst loss of life on a single day in the country's history.