Mana whenua of land that is set to have 480 homes built on it say they're prepared to put their bodies on the line to stop the development from going ahead. 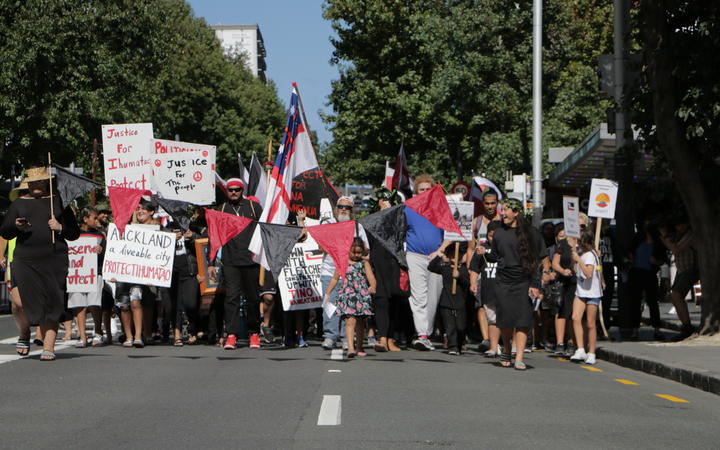 Ihumātao is located next to the Ōtuataua Stonefields Historic Reserve in Mangere - home to New Zealand's earliest gardens and a significant archaeological site on land considered wahi tapu, or sacred, by local hapū and iwi.

Part of the land - 32 hectares - is zoned as a Special Housing Area. It's owned by Fletcher Residential, which plans to construct 480 homes on the site.

The group behind the petition, Save Our Unique Landscape (SOUL), wants government to buy the land or "mandate a process that comes up with an outcome everyone can live with".

They've been fighting for years to have the land returned to them.

SOUL says for local Māori (mana whenua), the land "embodies sources of identity and wellbeing as well as family, community and tribal relationship".

Auckland Mayor Phil Goff said the council would take the petition seriously, consider the points in it and respond to it.

He acknowledged the area had been continuously settled by mana whenua for 800 years.

Council was restricted on what action it could take, but there were some things it could do to protect nearby land, he said.

"We own the land called the Rennie Block, nine hectares. It is currently designated for future development. Council will consider and I believe will change that designation to be for reserve purposes and public open space.

"Secondly, we have a critical area, Ōtuataua, the stonefields reserve. This is one of the most significant areas in our city in terms of history, in terms of culture and in terms of the people that reside there and the geological features that define it. Part of your request was to improve how we manage those 92 hectares and we will do that."

The council could not buy it, he said.

As Mr Goff handed off the microphone, a protester challenged him and asked why the council could afford $100 million for an America's Cup development but not $20m to buy Ihumatao.

Mr Goff did not respond.

Ms Matata-Sipu said there were some positives in Mr Goff's speech. But she was disappointed "to hear a similar korero that has happened over the past few years".

She said council had been passing responsibility for it to the government, who handed it back to council.

"At the end of the day, both of these governing bodies are responsible, they both need to come together for the future of Ihumātao ... this issue is not going to be finished for us, it's not going to be over until that land is protected."

Former politician Judith Tizard, who was representing a group of former MPs, mayors and councillors at the event, said Ihumātao was "literally" Auckland's birthplace.

"This piece of land as a whole is Auckland's birthplace. It's 800 years since the Tainui canoe came down the Tamaki estuary, across the portage and settled here and then spread out across Auckland and Waikato…

"This land has cultural significance, it has human significance beyond any other place I can speak of in New Zealand… The story of this place would break your heart.

"This land was stolen 166 years ago and there is no reason other than money that it can't be returned.

One supporter in the crowd said he - and others - were gathered so the public could hear their message and understand why they were protesting.

Another woman in the crowd said protecting Ihumatao was a "big thing" for her, even though she didn't live there.

"I can understand their struggle … It should be protected, it's their heritage."

The company hadn't been sent a copy but Mr Evans said it was SOUL's right to petition council.

Mr Evans knew the petition called for council or government to buy the land and both had previously told Fletcher they had no ability or need to do so, he said.

"Any site that Fletcher own is open to sale, that's the nature of private land. We have got all of the consents necessary to start work on this site. We think it's a very good site, that we've been working with mana whenua to come up with a great solution on, but at the end of the day, we haven't had any offers…

"We think it's a valuable piece of land, we'll look at offers that come and as I've said, we haven't had any offers to date. We haven't placed a value on what we would sell the piece of land for because we actually think we are going to be developing it."

Mr Evans said work on the site was starting "imminently".