The government has been delivered an 18,000 signature petition, calling on it to revoke a housing development consent on sacred Māori land at Ihumātao.

It was a sea of red, white and black as about 300 people walked up Lambton Quay and onto the grounds of Parliament, waving tino rangatiratanga flags and chanting "Ka whawhai tonu mātou...Ake, ake, ake" (We will keep fighting, forever).

The protest was lead by SOUL, a group of mana whenua and locals, who have occupied the land near Auckland Airport for the last 2 years in an effort to stop the 480-property development going ahead.

There was no sign of the prime minister, who was called on by a trustee at the local marae, Kowhai Olsen, to put an end to the consent.

"We implore you as the last resort to work with ministers to disestablish the SHA62 at Ihumātao, respectively signed by three out of four mandated trustees at "Makaurau Marae Maori Trust," she said, reading out a letter sent to the prime minister. 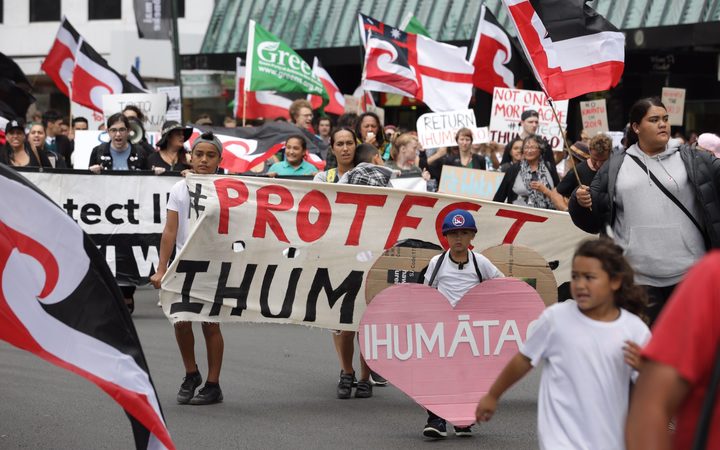 About 300 people walked up Lambton Quay and onto the grounds of Parliament. Photo: RNZ / Rebekah Parsons-King

The petition was handed over by a group of tamariki from Ihumātao to the co-leader of the Green Party Marama Davidson, who told the crowd that the development must not go ahead.

"A letter from me as co-leader of the Green Party is on its way to the prime minister as we speak, asking this government to take responsibility and prevent this development from happening."

The fight to stop the housing development has drawn support from across the country, with Karis Vesey flying down from Auckland especially to join the hīkoi.

"I am here because my grandparents can't be here and I think if they were physically able they would be down here to support them as well - I think we're a bit sick of seeing profit and wealth being put over the sacredness of land and our connection and spiritual affinity with the land." 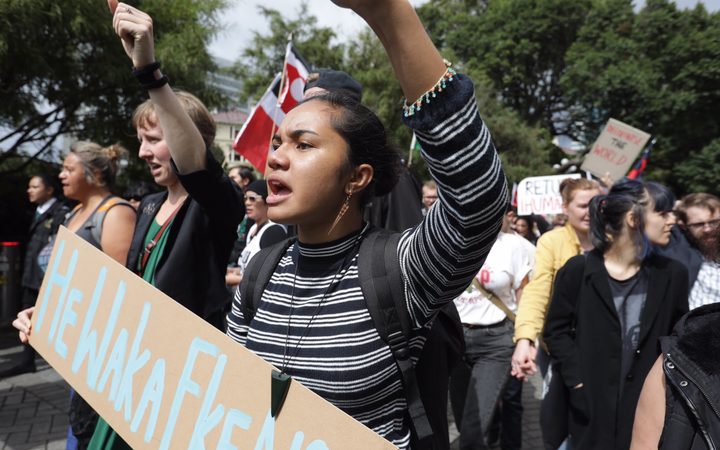 Hana also travelled from Tamaki Makaurau and said rangatira like Dame Whina Cooper inspired her to come down for the hīkoi.

"We're fighting for the exact same issues, so we're here in 2019 still fighting the repeat of history, which is the desecration of Māori heritage sites."

Kahu Kutia (Ngāi Tūhoe), who grew up in her turangawaewae in Te Urewera knows the importance of having a connection to the whenua.

"It is my whenua that I live and die by and I think that if 480 expensive houses were being put on my whenua, I would be doing the exact same thing that Pania and her cousins are doing," she said.

The leader of the SOUL campaign, Pania Newton, told the crowd that she wasn't convinced the government would stop the housing development.

"Because prior to the election of this government, the Labour Party in particular stood with Ihumātao and I was disappointed to see over the last couple of years they have turned their back on us," she said.

Despite that, Ms Newton said she and her whanau would not give up "until Ihumātao has secured justice," and she ended with a pao - a short chant.

The petition will be considered by a select committee.