Police have confirmed the man arrested over the Christchurch terror attacks will face 50 murder and 39 attempted murder charges when he appears in the High Court in Christchurch tomorrow. 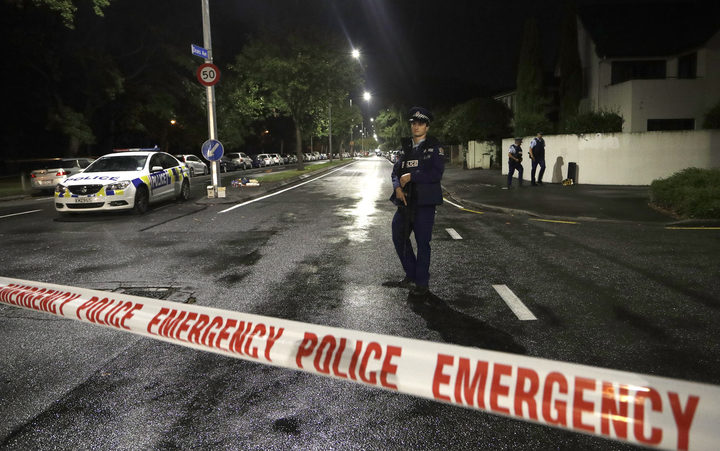 Police on guard in Christchurch on the day of the attacks. Photo: AP

The accused - Brenton Tarrant, 28 - has his first hearing in the High Court tomorrow after first appearing in the Christchurch District Court on 16 March.

He will appear via audio-visual link for what will be a "relatively brief" hearing.

The judge said the accused will not be required to enter a plea and the primary purpose of the hearing was to establish the accused gunman's legal representation, if any, and other administrative matters.

The accused had earlier told his duty solicitor he did not want further legal representation.

The media will have a right to remain in court for the hearing, but 12 in-court media applications to film, photograph and record sound at the hearing were declined by the judge.

The accused first appeared in the district court the day after the mosque attacks, on a single murder charge.

Police said in a statement today that other charges are "still under consideration".

Auckland University law professor Bill Hodge said that on a practical level that number of charges just would not work.

"Each one of these is painstaking, each one involves medical experts, cause of death, witnesses and so on. I think the police are trying to avoid any hiccup or any mistake.

"If they just laid one charge and they got it wrong ... I think they've got them all in reserve."

Professor Hodge said a court could not keep a jury together for that long for a start and he thought police were just trying to avoid any hiccups or mistakes.

One person still in critical condition

Meanwhile, all but one of the people injured in the Christchurch mosque attacks are now in a stable condition.

Sixteen people remain in hospitals in Auckland and Christchurch after the shootings that killed 50 people on 15 March.

One person remains in a critical condition in the intensive care unit at Christchurch Hospital while 11 others are all stable.

Two patients are at Burwood Hospital and a four-year-old girl is in Starship Children's Hospital.

Her father is also stable in Auckland City Hospital.