The cause of a helicopter crash that killed two people in Whangarei was not able to be identified, but mast bumping was ruled out, the final report has revealed. 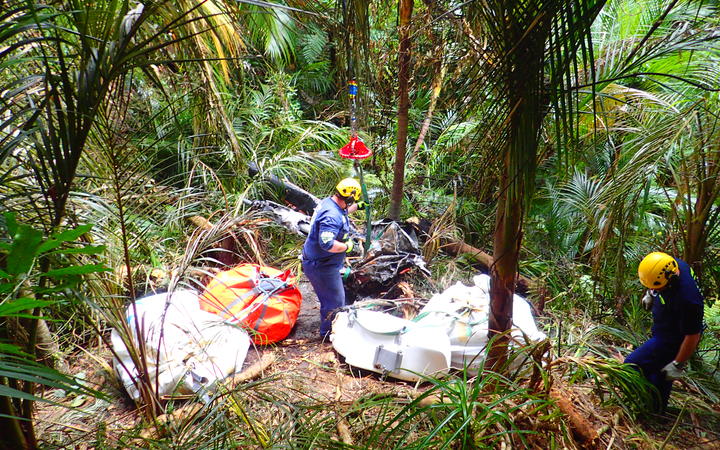 Allan Jessop and Derek Hammond died when their Robinson R44 helicopter crashed into the Glenbervie Forest, north of Whangarei in October 2016.

An interim report found that it was "very unlikely" that mast bumping - where the rotor blades make contact, causing the main rotor blade to strike the cabin and breaking up the helicopter in-flight - was not the cause.

Robinson helicopter models are currently on the Transport Accident Investigation Commission watchlist, as the models have been linked to mast bumping, leading to Fire and Emergency and the Department of Conservation banning the helicopter's use.

The Transport Accident Investigation Commission found that while mast bumping did occur, it was not a cause as the helicopter did not break up before it entered the forest.

The final report could not conclude what caused the helicopter to crash.

"We know what happened but why has eluded us - the reasons for that is both the occupants died and so there was nobody to talk to or explain what happened and there was a post crash fire that consumed a lot of the evidence and didn't leave us a lot to go on," investigator Tim Burfoot said.

The report made no new recommendations, but reiterated a previous recommendation that on-board recorders be fitted to certain classes of helicopter to aid accident investigation.

"For the small aircraft that we're calling for them to be fitted to there is no requirement, however there [are] iniatives at the international level - that's the International Civil Aviation Organisation - so they are developing legislation that will eventually one day require manufacturers to have or to install these recorders so our recommendation is that New Zealand support those iniatives."

Mr Burfoot said most of the manufacturers had started to install them, and were also initatives being developed for devices to be installed in existing helicopters.

He said that Robinson helicopters would remain on the watchlist, despite the fact that it wasn't a mast bumping accident.

"We are still concerned about the accident rate with Robinson helicopters in New Zealand - albiet there has been an improvement in recent years, and that's just something the commissioner will be turning their mind to when they were reviewing that watchlist item."