A former gang member has visited the area around the mosques at Deans Ave and Linwood Ave everyday to pray for the victims and says the accused shooter won't get a reaction from him. 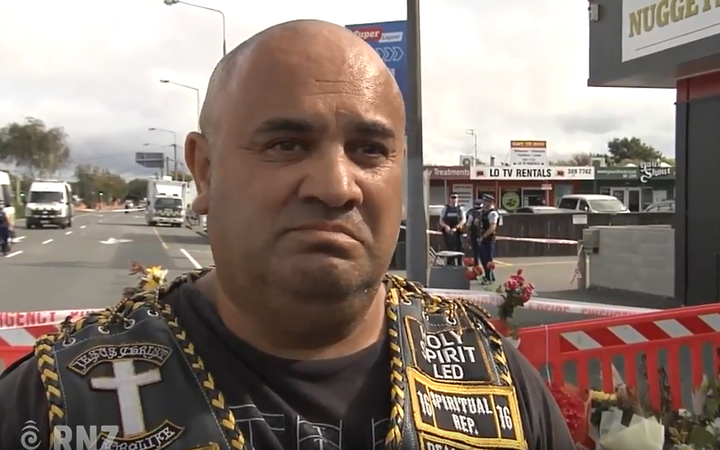 Now part of Peacemakers, Shane Tanu said it was all about "the love, hate's just ugly and it's poison".

"I actually choose to show love because if I let him [the accused gunman] make me feel hateful or spiteful in reacting how I feel towards him, he gets the power," he told Checkpoint.

"I don't want to let him have that power over me."

A Christian, he came down to both mosques every day for the past three days.

"I went down to Deans Ave and the gardens, just meeting the people, the Muslims, showing them the love and saying 'this is your place, I'm sorry'.

"Words can't say enough, but my actions do."

And he keeps returning to "show the love ... that they are loved, they are valued and there's no need to have fear because we as New Zealand have their backs".

"When you show real love to people, when you hug them ... a hug does something amazing, it makes them feel people care."

Meanwhile, Hamilton mosque opening its doors to the public this Friday has also welcomed the Mongrel Mob.

Dr Asad Mohsin said the doors to Hamilton's Jamia Masjid would be open to everyone - including the Mongrel Mob, who asked if they could stand guard outside the mosque on Friday.

"They don't need to stand outside the mosque, they can come inside the mosque because as far as we are concerned, we are not scared," he said.

"If we have to face anything, we will, as a community, stand up and face it. We don't want to give that reflection to anyone that we are scared. "

The Hamilton mosque will be open from 2pm Friday.