Ngāwhā marae near Kaikohe has welcomed a giant to its grounds today - a huge swamp kauri log. 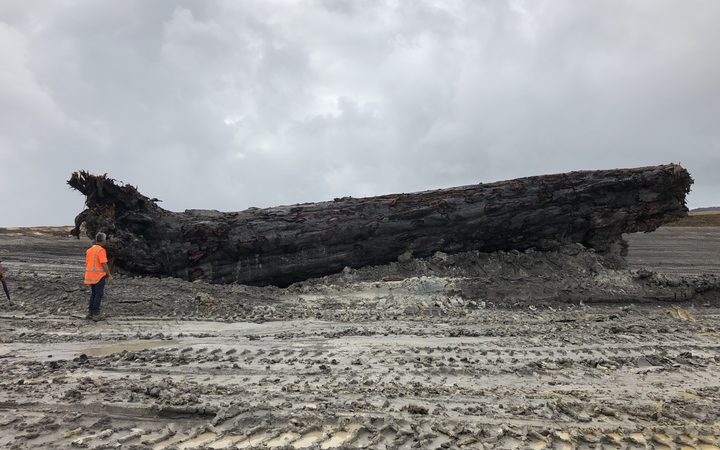 A huge, ancient kauri log has been unearthed in Northland. Photo: Supplied

The ancient tree, 16 metres long and weighing 60 tonnes, was found in February by contractors doing earthworks for the power station expansion.

The kauri was found 9m deep and was the only one uncovered at the site, according to Top Energy chief executive Russell Shaw.

The company began earthworks for the expansion in 2017 and had excavated 900,000 cubic metres of soil, before the rare find, he said.

The tree was blessed by a kaumātua, before it was carefully excavated under supervision of the Ministry for Primary Industries.

"There was no doubt in my mind that the ancient log should come under the guardianship of Ngāwhā Marae," he said.

The marae's komiti (committee) chair Richard Woodman described the find as a precious cultural artefact - a remnant from an ancient Kauri forest that had been buried and preserved in clay up to 50,000 years ago.

"What you've given us is priceless and is something that will live on for generations, he taonga tuku iho for Ngāti Rangi ki Ngāwhā."

The Ngāwhā Marae Trustees, as kaitiaki and guardians of the kauri had made a commitment to treating it with the utmost respect, said they would use it to enhance the cultural identity of the hapū.

The ancient tree has been topped and tailed to allow removal to the Ngāwhā Marae, where the now 14-metre log was welcomed today with a powhiri.

Mr Woodman said there would be many discussions with surrounding hapū before any decisions were made on what to do with the valuable timber.