See the new view of the river here

It then used the imagery to create a 360-degree virtual tour of the 425km river from Port Waikato to Lake Taupō.

Google said film was taken by drone over the eight hydro dams on the river and three sets of rapids. 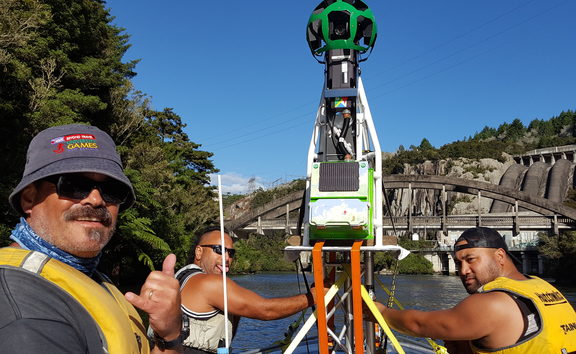 Behind the scenes of the Google Street Trekker taking images for a view of the Waikato River. Photo: Supplied / Google

In the past the Google Street View Trekker has travelled down the Venetian Canals, the Colorado River and London's River Thames but this is the first time a New Zealand river has featured.

The Waikato River Festival helped in the project.

Festival director Craig Muntz said it required a real collaborative effort from various community stakeholders along the length of the river.

"We are extremely thankful for the community support received, which has in turn resulted in the production of a community resource that also offers a great platform for sharing the story of the river and our region, with nearly every bend on the river having a rich story to tell."

Mr Muntz said it would also be a useful tool for kaumātua and kuia, who might not be able to travel on the river anymore so they could stay connected to the awa.