US Democrats have laid out a "Green New Deal" that would eliminate US greenhouse gas emissions within a decade, in an effort to make climate change a central issue in the 2020 presidential race. 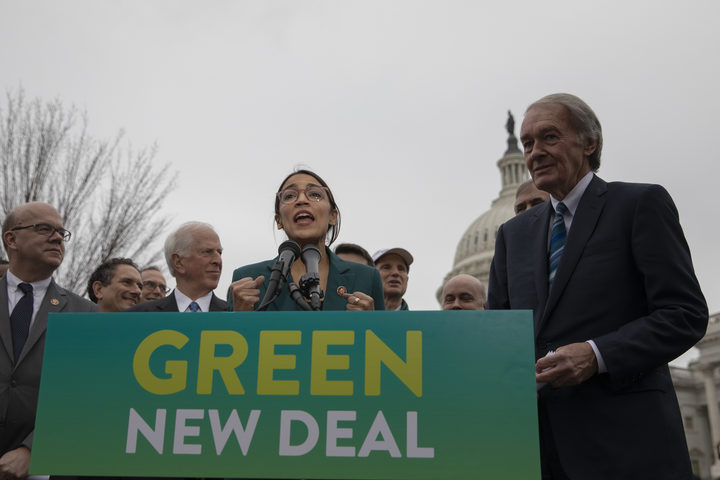 The document, unveiled by New York representative Alexandria Ocasio-Cortez and Senator Edward Markey, marked the first formal attempt by US lawmakers to define potential legislation to create big government-led investments in clean energy and infrastructure to transition the US economy away from fossil fuels.

Taking the form of a non-binding congressional resolution, it outlines some of the most aggressive climate goals ever put forward by Democratic lawmakers and clashes dramatically with the Trump administration's efforts to advance domestic oil, gas and coal production by rolling back environmental protections.

The name, Green New Deal, references the New Deal of the 1930s that President Franklin Roosevelt implemented to aid Americans suffering in the Great Depression by embarking on huge government-led infrastructure projects.

"Today is the day that we choose to assert ourselves as a global leader in transitioning to 100 percent renewable energy and charting that path," Ms Ocasio-Cortez said.

The resolution so far has 64 House co-sponsors and nine Senate sponsors - four of whom are Democratic presidential hopefuls for 2020. Senators Kamala Harris, Kirsten Gilibrand, Corey Booker and Elizabeth Warren co-sponsored the resolution.

Ocasio-Cortez said she would immediately begin work on legislation that would "fully flesh out the projects involved in the Green New Deal."

Republicans have been quick to criticize the initiative, waving off any kind of proposal as heavy-handed. The Trump administration does not believe action on climate change is necessary and is focused on increasing production of oil, gas and coal on federal and private land.

"It's a socialist manifesto that lays out a laundry list of government giveaways, including guaranteed food, housing, college, and economic security even for those who refuse to work," Senate Environment and Public Works committee chair John Barrassoof, a Republican Senator, said.

The non-binding resolution outlines several goals for the United States, including meeting 100 percent of power demand from zero-emission energy sources like wind and solar within 10 years. 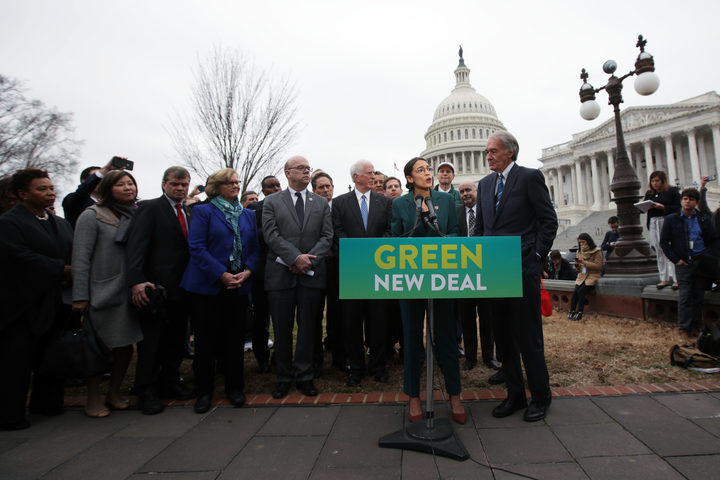 The authors said it was intended to address the latest report by the Intergovernmental Panel on Climate Change, which said global temperatures must be kept within 1.5C of preindustrial levels to avoid the most severe impacts of a changing climate.

The Green New Deal also aims to create an economic safety net for communities that will be affected by the impacts of climate change and the shift away from fossil fuel use, including through guarantees of healthcare, jobs, and jobs training. It was not clear how the programs would be funded.

The Green New Deal was put into the media spotlight by a youth coalition called the Sunrise Movement and Ms Ocasio-Cortez, 29, the youngest woman to serve in Congress.

Members of the group have already put pressure on Democratic presidential hopefuls and plan to continue lobbying members of Congress next week to support the resolution.

"They will not accept vague endorsements," he said.

Markey said on Thursday that despite its lofty goals, the Green New Deal has more political momentum than a carbon cap-and-trade legislation he introduced 10 years ago.

"The difference between 2009 and today is the movement that has now been built," he said. "This is going enter the 2020 election cycle as one of the top two or three issues for every candidate on both sides."