Rising temperatures will change the colour of the world's oceans, making them more blue in the coming decades, scientists say. 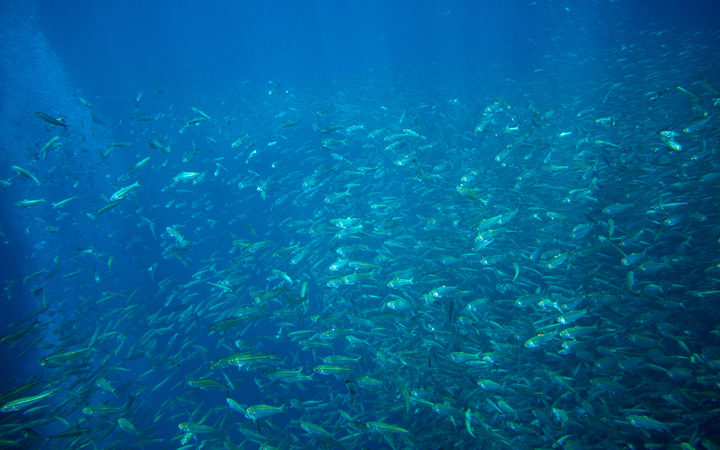 They found that increased heat will change the mixture of phytoplankton or tiny marine organisms in the seas, which absorb and reflect light.

Scientists say there will be less of them in the waters in the decades to come.

This will drive a colour change in more than 50 percent of the world's seas by 2100.

As well as turning sunlight into chemical energy, and consuming carbon dioxide, they are the bottom rung on the marine food chain.

They also play an important role in how we see the oceans with our eyes.

The more phytoplankton in the water, the less blue the seas will appear, and the more likely they will be to have a greenish colour.

Previous research has shown that with warming, the oceans will see a reduction in phytoplankton in many places.

This new study models the likely impact these changes will have on the colour of the ocean and the planet as the world warms up.

"What we find is that the colour will change, probably not so much that you will see by eye, but certainly sensors will be able to pick up that there's a change," lead author Dr Stephanie Dutkiewicz from Massachusetts Institute of Technology (MIT) said.

"And it will likely be one of the earliest warning signals that we have changed the ecology of the ocean."

The researchers point out that the changes are an indirect impact of climate change, as warming is affecting the circulation of the seas, this is changing the amount of food available for phytoplankton.

Another difference from previous studies is that this time, the researchers are looking solely at satellite measurements of reflected light from the phytoplankton.

In the past, scientists have used satellite measurements of chlorophyll, a light-harvesting pigment found in phytoplankton, to try and understand the impact of climate change.

However, they've had problems working out the difference between natural variability and human induced warming on this green pigment.

They believe it will be 30-40 years before they can say for certain that climate change is having an impact on chlorophyll.

"What we've shown is that the colour in the blue-green range is going to show that signal of change sooner, in some places in maybe the next decade," said Dr Dutkiewicz.

"More of the ocean is going to show a change in colour over the next few decades than we would see in chlorophyll, the changing colour is going to be more of a warning signal."

The researchers believe that the North Atlantic will be one of the first places to reflect the change - followed by locations in the Southern Ocean.

Natural patterns seen on the Ukrainian river Dnepr covered by cyanobacterias as a result of phytoplankton evolution in hot seasons.

The team modelled what would happen to the oceans by the end of this century if the world warmed by 3C, which is close to where temperatures are likely to be, if every country sticks to the promises they have made in the Paris climate agreement.

"There will be a noticeable difference in the colour of 50 percent of the ocean by the end of the 21st century," Dr Dutkiewicz said.

"It could be potentially quite serious.

The team also believe the world will see changes in some of the green shades seen in the oceans as well.

This will happen because some species of phytoplankton will respond well to a warmer environment and will create larger blooms of more diverse marine organisms.

This is likely to show up with more green regions near the equator and the poles, the researchers say.

The study has been published in the journal Nature Communications.