Shane Jones has warned Destiny Church leader Brian Tamaki to watch his mouth, after he referred to northern Māori MP's as "spuds".

He said Mr Tamaki had no standing in the north and should watch what he said.

Mr Jones said if Mr Tamaki wanted to re-enter the political arena where he had failed in the past, he should bring a mouth-guard. 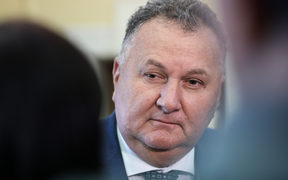 He said the Destiny Church contingent was out of place at Waitangi and disturbed the wairua (spirit) with their bling, black leather, and noisy motorbikes.

A spokesperson for the church said Mr Tamaki would not comment on Mr Jones' comments.

"This is petty grandstanding and it is not part of his call to respond."