The Commerce Commission is set to make its case against controversial ticket reseller Viagogo at Auckland High Court today. 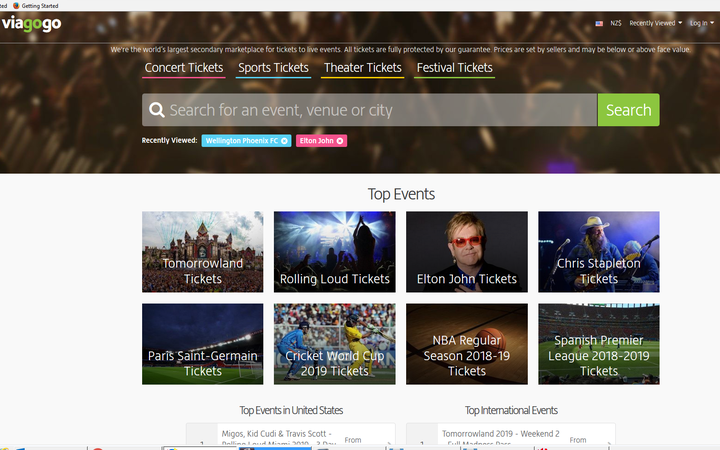 A screenshot of the Viagogo website. Photo: Screenshot / Viagogo

In August last year the commission announced it was suing the Switzerland-based ticket resale website for making a number of false or misleading representations.

The commission has received more than 400 complaints about Viagogo since the start of 2017 - making it the most complained about trader in that period.

In the High Court today, the commission will claim Viagogo has breached the Fair Trading Act by misrepresenting itself as an official seller, making misleading claims about the availability of tickets, and advertising the incorrect price for tickets.

It wants an injunction to stop the Switzerland-based website from committing further breaches.

Joe Calcutt purchased a ticket to Auckland's Laneway Festival on Viagogo a few months ago. But on the day of the festival, he was stopped at the gate and told his ticket was not valid. He then went to the festival's ticket office.

"It was kinda nerve-wracking because there were two or three people there who were crying and I was like 'Oh! Something's up' and it turns out ... there were quite a few people whose ticket was cancelled before and then resold," Mr Calcutt said.

He had never heard anything bad about the website and thought it was a trustworthy ticket reseller.

"When you google tickets for things, they're always the first thing that comes up. It's not like they're super cheap tickets, that are dodgy in that way. I guess I feel like a fool for trusting that," Mr Calcutt said.

Mr Calcutt was able to purchase another ticket on the day but has not had any luck getting a refund for the invalid ticket.

Consumer NZ chief executive Sue Chetwin said the company is hard for punters to deal with.

"With Viagogo it's almost impossible to find anybody to speak to if something goes wrong. They're based in Switzerland and very secretive," Ms Chetwin said.

The idea of having an outlet for punters to resell unwanted tickets is great, Ms Chetwin said.

"The concept of a ticket reselling site is actually quite good if you genuinely bought some tickets and want to get rid of them. But Viagogo turned this into an international business and in some circumstances, the tickets are actually fraudulent," Ms Chetwin said.

This case is not the first against Viagogo - the company is facing court or enforcement action in Switzerland, Germany, France, the UK and Australia.

A Fair Trading Ticket Scalping Amendment Bill was introduced into parliament in South Australia last year, which would make it illegal for another to sell tickets or advertise the sale of tickets at a price that is more than 110 percent of the original ticket price.

"The first approach of the Commerce Commission is a first good step but we'd like to see a legislation put in place and sending a very strict and clear message to Viagogo or others that this practice is unacceptable," Ms De Fontenay said.

The Commerce Commission will not be seeking refunds for individual customers at the High Court.