The Ngaruāwahia Community Board has made its local pools cheaper this summer in an effort to stop people jumping of a rail bridge where an 11 year old was killed last year.

But even though the pool is proving popular, there are still people taking the risk and jumping off the bridge.

With the mercury rising, the Waikato River is a popular spot for many locals to cool off during the summer.

The Ngaruāwahia rail bridge has been a local staple too - despite the risk it poses to anyone who jumps off it.

When RNZ visited the rail bridge yesterday, there were a number of people jumping off the bridge.

The Ngaruāwahia Community Board wants this to stop - so this summer it's subsidising pool fees by 50 per cent to encourage more people to use them instead and extending pool hours. 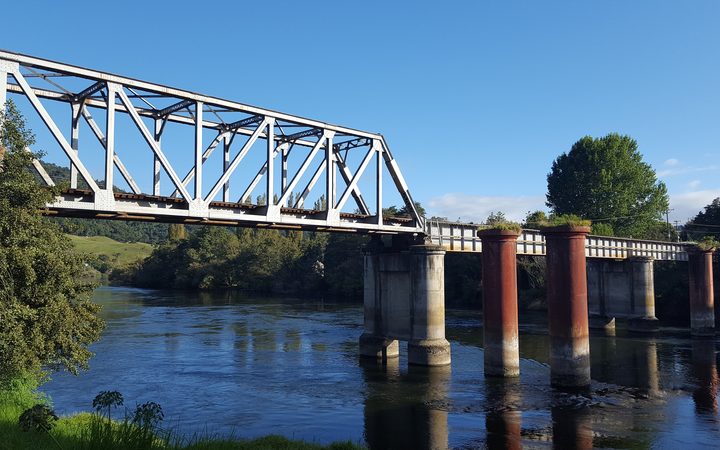 Ngāruawāhia rail bridge, where children jumping off into the water have been hit and killed by trains. Photo: RNZ / Andrew McRae

Ngaruāwahia ward councillor Janet Gibb said it was action driven by the community.

"This is an initiative that came out of the hui that the community held after we had a death on the rail bridge.

"What we wanted to do was create activities where the local children could go and it wouldn't cost them too much."

Last year, 11-year-old Moareen Rameka was hit by a train on the bridge - the second child to die after Jayden Nerihana Tepu was a hit by a train in 2002.

Ms Gibb said the deaths have had a major impact on the community.

"It's 10 months now since the child was killed on the rail track and it was a tragedy and we've had one other tragedy before.

"The impact was huge we're wanting to find solutions to keep these children off the tracks and away from the river."

This summer, the cost for a child to use the Ngaruāwahia Pools has been $1 for kids and $2 for adults.

Ms Wiggins encouraged those still using the bridge to try the pools instead.

"Just come down to your pool we've got a great inflatable that the community board has purchased for down here, we've got staff who watch you - you're safe."

Local Gemma Muru has used the pools over the summer but believed it was a tough task to stop people jumping off the bridge.

"I like the cheap fees take my kids down to the pool but it's not gonna stop them from jumping off the bridge they'll always jump off it.

Another local, known as Sarj, understood people have jumped off the bridge for years, but things needed to change.

"At the end of the day it's quite dangerous and there are adults that go down there and still jump off and I'd encourage them to look at their behaviour because the kids are going to follow them up there."

He has challenged the council to invest more in rangatahi.

A free community event will be held at the Ngaruāwahia Pools on Waitangi Day to encourage more children to swim safely.