High fuel prices and Auckland traffic could be a thing of the past for some as developers look at options to ditch the car. 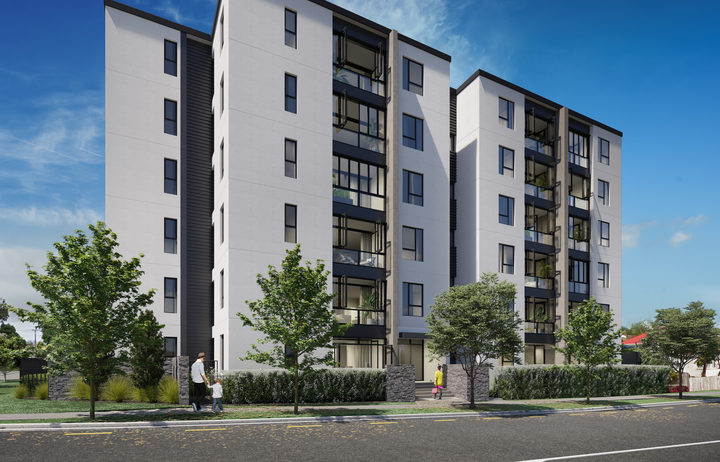 A new development in Panmure won't offer any carparks - instead it will rely on public transport and shared electric vehicles for its residents.

Long commutes stuck in traffic aren't uncommon - particularly for many first-home buyers who have no choice but to buy on the city's fringes.

"Realistically in Auckland now $40,000 to $50,000 is what you'd be paying to own a carpark," Rethinking Space general manager Mike Beazley said.

"A small second-hand car would be $7000-$8000 a year which would include your insurance, depreciation, paying off a car loan all those things. They are real savings and in other parts of our business Solution Street we've had people who've said 'well actually I'm going to sell my car because if I sell my car or downgrade my vehicle that means I can actually afford to get into a property'."

The developer's most recent project on the corner of Jellicoe Road and Dunn Road is based around a model called TOD - or transit-oriented development.

"You do have local buses, local trains, and they are building a cycleway from Panmure all the way into the city so you could hop on a Lime scooter or an electric bike or if you're feeling fit, a normal bike, and head into town," Mr Beazley said.

"We are looking to provide in partnership with Hyundai a fleet of five shared electric vehicles and they will be there for the exclusive use of the apartment owners."

They're ditching carparks altogether, leaving space for just the electric cars which would be shared between the 46, one and two-bedroom, apartments.

"They're able to use an app that is already commercially available, it's been developed in Wellington. So the app on their mobile phone they can literally just book out the car for half an hour or an hour to use the vehicle to go shopping, they can head across town to see some friends and [it] just gives them a viable alternative to owning their own car," Mr Beazley said.

He said studies showed one vehicle per eight to 10 apartments would work.

"We're not saying this is the solution for everybody because obviously some people, if you've got a small family or you've got a company vehicle you're going to need a carpark, but we're targeting the commuter who is heading into town from Panmure or heading into Newmarket and can get to work easily but also can just pop in the car to go to the shop if they need to."

If people did want to keep their own car they could still park on the street. 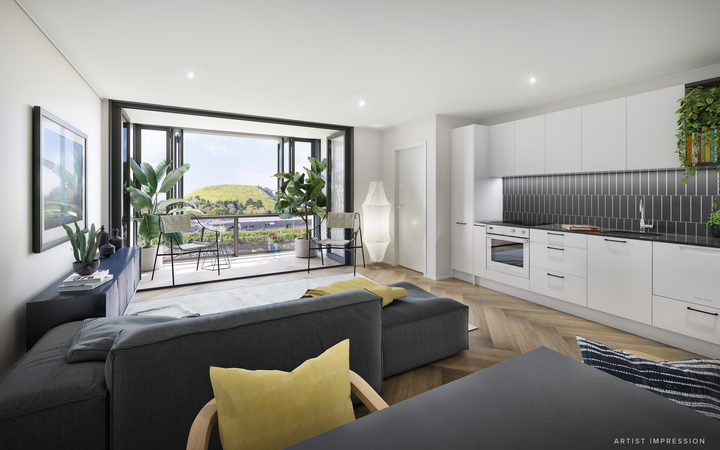 Artist's impression of the living room at one of the apartments for the development project on the corner of Jellicoe Road and Dunn Road. Photo: Supplied

A senior architecture and planning lecturer at the University of Auckland, Bill McKay, said other developers have done similar projects but on a smaller scale in Auckland.

"I think we'll see a whole lot more of it because Auckland's committing itself to public transport, people are taking up public transport and also you can save a hell of a lot of money by not having a carpark in an apartment building."

The city's planning laws under its Unitary Plan had eased the need for residential developments to provide parking, he said.

"So for inner city suburbs they're basically saying well if you can live without a carpark in Sydney and Melbourne you should be able to live without it in Auckland," Mr McKay said.

"We need to learn that housing and public transport go hand in hand if we're going to see more density under the Unitary Plan."

First Home Buyers Club spokesperson Lesley Harris said people were struggling to get a deposit and afford a mortgage.

"Anything that is going to assist people to purchase less expensive properties and/or save on costs such as transportation, we need to be thinking outside the square," Ms Harris said.

People were already making compromises on transport, she said.

"If we look at some of the innovations like the trains, the park at ride type developments in Auckland over the last five to 10 years and the increase in take up I think it's very fair to say people would certainly consider other means of transport," Ms Harris said.

"I think it will be something that time will tell. I think Kiwis do like to have their own car so some of the other innovations like park and ride, buses, trains, people don't necessarily not have the car ... anything that could mean that someone could free up some capital to put towards a first home is certainly something that's really, really worth looking at. "