The search for a humpback whale entangled in ropes in the Bay of Islands has been called off for the day.

Three boats and a helicopter have been looking for the whale since this morning after it was spotted yesterday in trouble off Deepwater Cover. 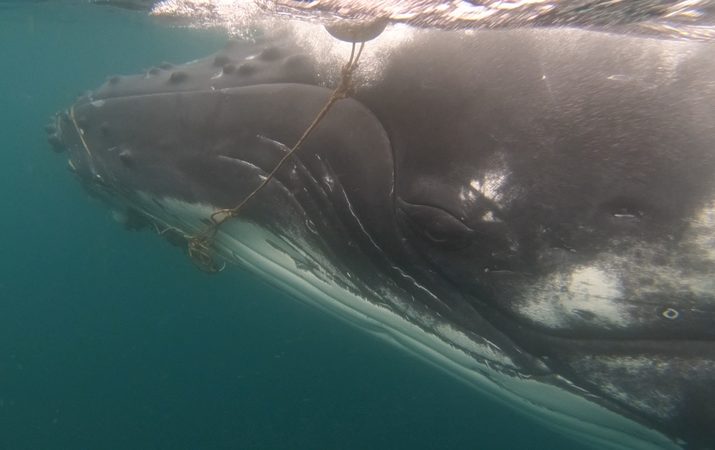 The Department of Conservation is hunting for a humpback whale tangled in ropes in the Bay of Islands. Photo: Catherine Peters DOC

The big animal was spotted off Deepwater Cove yesterday, but a specialist Department of Conservation (DOC) team was unable to cut it free in rough conditions.

"It has ropes around the snout and one particular rope with a knot on it that's hooked into the baleen of the whale's mouth, so the mouth is shut," she said.

The rope around the snout had a buoy attached to it, and another line seen going down into the water was probably tied to a craypot, she said.

Ms Elliot said the whale was breathing, but unable to eat and would be getting weaker.

DOC's whale entanglement response team got within metres of the humpback yesterday and it did not react with any vigour. This suggested it was already tired, she said.

Sea conditions had prevented any bid to cut the ropes yesterday and choppy seas today were making the whale hard to spot.

Humpbacks were playful and liked to bounce the buoys attached to craypots, Ms Elliot said. 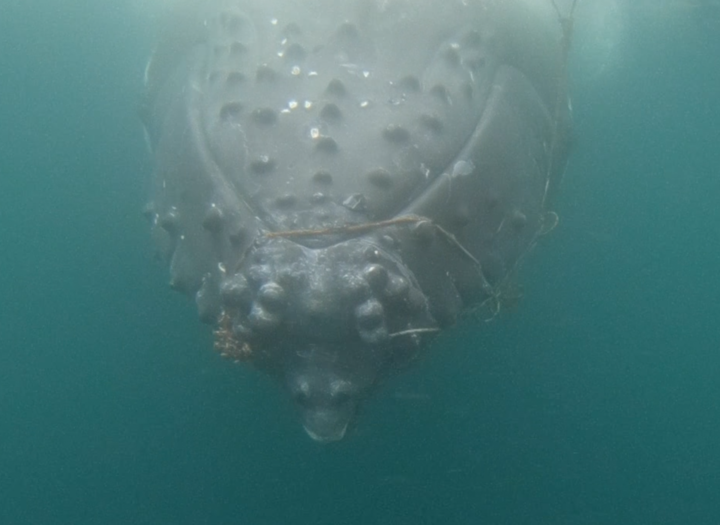 The humpback whale has ropes tangled around its snout, so it cannot eat. Photo: Catherine Peters DOC

"Sometimes when the pots aren't laid properly and the ropes aren't taut, the whale can become entangled in the ropes. But it's the first time it has happened in the Bay of Islands that I can remember," she said.

It was hard to say how long the humpback could last without help.

"It won't have eaten for a couple of days. Its tail and pectoral fins aren't moving much and it's drifting rather than moving itself, not far below the surface."

DOC said it will continue the search tomorrow when the weather is expected to improve.

Boaties have been asked to stay well clear to reduce stress on the humpback and let the trained rescue team do its job.

Humpbacks could weigh up to 50 tonnes and this one would not be happy about being interfered with, so extreme caution was needed, DOC said.