Forest and Bird wants the same protection for Hector's dolphins in Tasman Bay and Golden Bay that they get in other marine areas around the country. 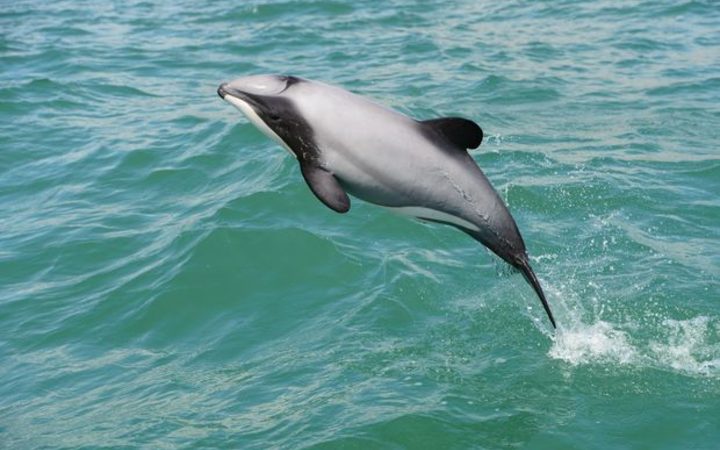 The Department of Conservation has established five marine mammal sanctuaries in Hector's and Māui dolphin habitats, but none at the top of the South Island.

Debs Martin of Forest and Bird said Hector's dolphins were once abundant in this region, but they lacked the same protection as those in other parts of the country.

Hector's dolphins are the smallest and one of the rarest marine dolphins in the world, and are endemic to New Zealand. They are distinct for their size and dorsal fin which looks like a "mickey mouse ear".

"There are populations of Hector's dolphins throughout Golden Bay and in Tasman Bay, and historically they were probably abundant in this area but their numbers have been lowered," Ms Martin said.

Stewart Robertson has been running eco tours near Abel Tasman National Park for 16 years and told RNZ's Checkpoint the sight of a pod of rare Hector's dolphins had brought tears to the eyes of some of his customers.

Ms Martin said she had been prompted to help raise the profile of their plight, after a Golden Bay fisherman contacted her to express concern about the threat posed to them by gill nets.

She raised concerns with the Nelson Marlborough Conservation Board, whose chair, Gina Solomon, said the board received the information as a submission to its public forum.

She said the board welcomed general information but further action needed to be balanced with science and research.

Ms Martin said Hector's dolphins tended to be faithful to a geographic area, as opposed to migratory, and their genetic pool became quite specialised.

"The dolphins we see in the top of the South Island - the work we know that's being done by some of the scientists towards reviewing the threat management status of dolphins, is that these are probably the most genetically connected to Maui dolphins, which are a sub-species of Hector's."

Ms Martin said it was difficult to calculate dolphin numbers, and while some work had been done, more was needed

She said a mobile phone app had been created for sightings.

"This will allow people to record sightings and any other details they see around Hector's in this area.

"We know it's been picked up by some tourism operators and others out on the water, and so we're starting to get a better picture of the numbers, but it's still coming in."

Ms Martin said Forest and Bird planned to have input into discussion papers due out on the tightening of conservation rules around Hector's dolphins.

"In the interim, if people can record where they see Hector's dolphins, that would help."

She urged people to be extra careful when putting out fishing nets in areas where they were allowed, by making sure they stayed with them.

"A lot of people throw out a set net, go away for half a day, come back, haul it in and find all sorts of catch and that's what we want to stop."

The Hector's Dolphin Sightings free app is available from Google Play and the App Store.