Austrian oil and gas company OMV has told a hearing in New Plymouth that trace amounts of harmful chemicals it wants permission to discharge into the sea off Taranaki will have little effect on the environment. 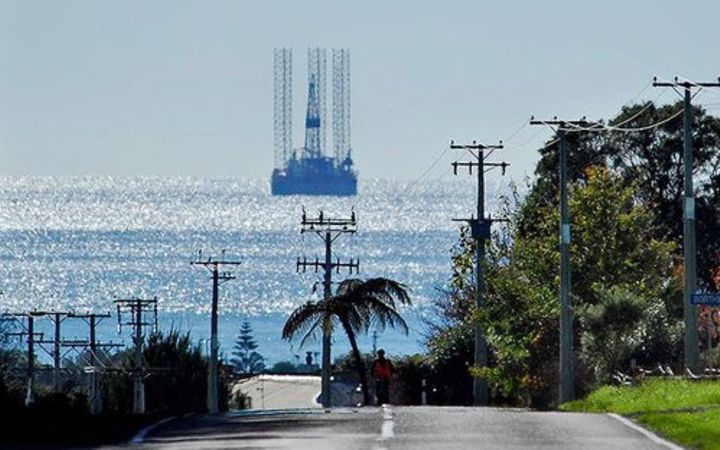 A drilling rig off the coast of Taranaki Photo: Photo NZ

The company has applied to the Environmental Protection Authority (EPA) for marine discharge consents in case there is a spill on the deck of one of its mobile offshore drilling platforms during a planned exploratory and appraisal drilling (EAD) programme.

Counsel for OMV James Winchester told the hearing the company was taking a precautionary approach.

"It is OMV's intention that the EAD programme will take place without any harmful substances being spilled on the decks of a mobile offshore drilling unit at all.

"If a spill does occur, it will be cleaned up immediately...and trace elements would ultimately be washed into the deck drainage system where they would possibly be removed or otherwise substantially diluted and then discharged into the sea."

Mr Winchester said any discharge of harmful substances would be small.

"OMV has conservatively assumed that a maximum volume of harmful substances from a spill that was washed into the deck drainage system would be 250ml, or one cup."

The application forms part of an exploratory drilling programme covering six permits, potentially up to 12 wells and 9000 square kilometres of ocean floor.

The EPA has received 44 submissions on OMV's application for marine discharge consents only three of which were in favour of granting the consents while one was neutral.

Climate Justice Taranaki (CTJ) was the only group opposed that made a submission in person today.

Ms Cheung said while the EPA had sought public submissions on the marine discharge consents at least two other consents applications were expected and she thought they should all be considered together.

"Our interpretation of Section 44 was that it's designed to enable joint processing and there for comprehensive assessment of cumulative effects of related activities. It seems we were wrong."

Ms Cheung said the Taranaki Bight was of critical importance to marine mammal conservation and notably the Maui's dolphin and blue whale.

"We are particularly concerned with the impacts of the cumulative effects from industrial activities combined with the rapidly changing physical, chemical and biological oceanography of the Tasman Sea on these and other threatened species."

Her colleague Dr Lyndon DeVantier took issue with the fact that while the company was required to seek a marine discharge consent its exploratory drilling programme was a non-notified activity.

"It's widely accepted that exploratory drilling poses a much greater immediate risk that most other fossil fuel activities, at least at local to regional scale.

"These risks are amplified in the storm lashed Tasman Sea and further amplified by New Zealand's lack of rapid response equipment."

Mr DeVantier said a public hearing on the exploratory drilling programme would at least offer some transparency even though the Exclusive Economic Zone Act did not allow public submission on non-notified applications.

OMV's senior vice president Australasia Gabriel Selischi told the hearing the company had a presence in New Zealand for 20 years.

"Our business is our reputation so, for us, it is very important what we do and how we do it because this is how we manage to be sustainable."

Mr Selischi said OMV had an interest in the Maari oil field and was in the process of acquiring Shell's New Zealand assets.

"These assets are in decline and in order to ensure the sustainability of our presence and production and to give to New Zealand the energy that the country needs, we need to perform exploration."

Mr Selischi emphasised that it made sense to produce the energy required in New Zealand locally and the oil and gas sector was a significant contributor to the economy.

"We believe we employ a number of people and it is quite significant. More than 5000 people are working for the industry in Taranaki and if you consider our contractors this figure is much higher. Some people are talking about 10,000 or 11,000 people.

"What is certain is that if this exploration is successful is that there will be more jobs generated.

"We also contribute significantly in terms of royalties and taxes...$1.5 billion."

Iwi affected by OMV's application were divided on whether it should be granted.

Ngāti Ruanui favoured granting the application with conditions, Taranaki took a neutral stance while Ngāruahine and Te Ātiawa believed the application should be declined.