A Taranaki man diagnosed with terminal cancer says while Parliament wrestles with medicinal cannabis law reform he is being forced to live like a criminal. 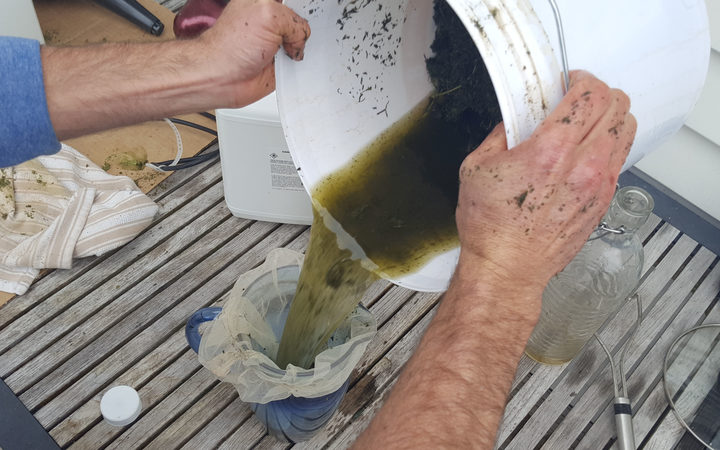 The father of two, who RNZ has agreed to call John, said he has to buy marijuana in dodgy late-night deals in deserted car parks and has to navigate around his children and neighbours to manufacture his own cannabis oil.

He said it helps fight his cancer, alleviates symptoms and allows him to rest.

When RNZ visited his neat suburban home, John was processing his latest batch of cannabis oil.

There were two late-model vehicles parked out front of the weatherboard bungalow. The lawn was neatly cut and a trampoline had pride of place in the back yard.

But on the rear deck the sweet smell of marijuana bud was competing with the astringent odour of isopropyl alcohol and a black ooze was quietly bubbling in a rice cooker nestled under a work table.

An array of muslin cloths, filters and jars stood at the ready.

Manufacturing cannabis oil on the back deck was not something the successful businessman ever imagined himself doing. 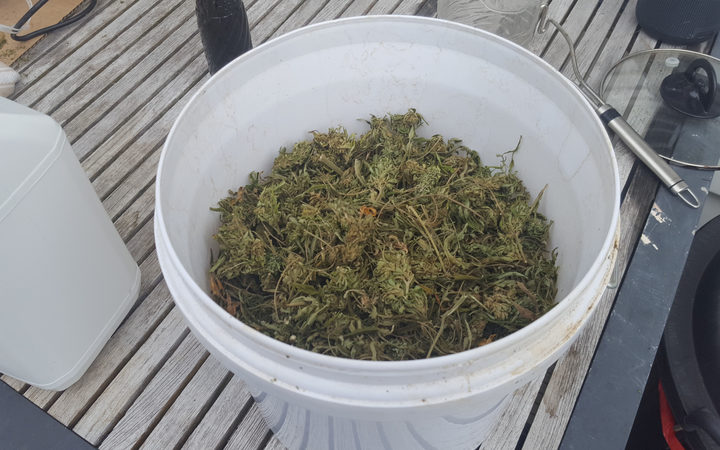 "I was diagnosed with a grade 4 GBM brain cancer. I was told 16 months ago I had an average of 14 months to live so I've out done that already and I'm still standing here and functioning normally. I have got a few problems but nothing too bad."

In his early 40s John sold his business and he and his wife, who RNZ has agreed to call Sue, turned the focus onto the family and his wellbeing.

After starting with conventional treatments the couple decided, in consultation with John's oncologist, to try a combination of conventional and alternative therapies.

"The information that is out there about the benefits of medicinal cannabis on the internet - Dr Google - is huge and you end up going 'I need to get a hold of some of that' and in New Zealand it's not there.

"And so as an upstanding citizen that I am in this world ... I've done everything by the law in my life ... here I am breaking the law just to make sure I can stay on this earth and be with my family." 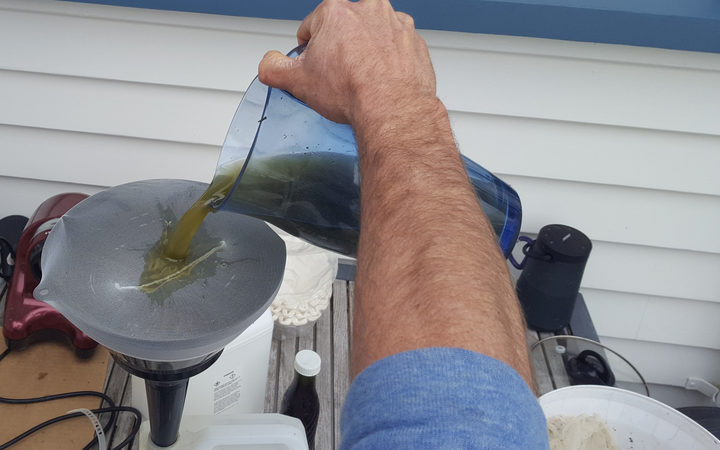 Filtering the leaf material out of the liquid Photo: RNZ/Robin Martin

Well-insured, John has spent hundreds of thousand of dollars on various treatments and even travelled to overseas clinics in an effort to beat his illness, but the decision to source cannabis locally plunged him into a perhaps even more unfamiliar world.

"I just feel like I'm dodgy, you know getting text messages from dealers that delete [automatically] and meeting them in dodgy car parks around the province. It's quite funny really trying to do it. These people are who are growing it around the place I want to keep them safe too. It's part of the game, it's quite fun."

John ingests four or five doses - about the size of a grain of rice - a day and reckons half a kilo of marijuana distills down to about 20ml which will last him about six months.

Sue doesn't even consider what they are doing is illegal.

"It's just part of life now. It obviously wasn't in the long term plan but if it keeps him well by all means. I hardly even think about it. I don't feel like we've broken the law at all.

"I know we have but this feels a lot more natural and where you compare the cost of this it's very low compared to John's current treatment which is $70,000 and that's one injection every three weeks."

Sue believes cannabinoids have an advantage over other therapies.

One of the difficult things has been managing the manufacture of cannabis oil around the couple's children aged eight and 10, John said.

"It's called 'dad's medicine'. I don't make it in front of them and I keep it away from them and obviously they are at school at the moment and I'll clear this all up before they come home. And as far as my tablets are concerned they know that's my medicine and they are not to touch it."

All of this could be much easier if medicinal cannabinoids were freely available in New Zealand, but John is not a fan of the government's medicinal cannabis bill which he says doesn't go far enough. 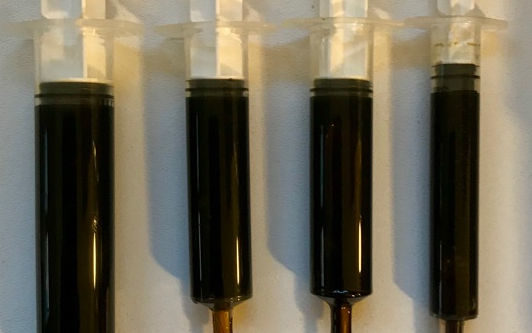 National's member's bill addresses supply, but John's concerned it may never see the light of day.

"If the National one came through. Yes, most probably I still can't grow my own or make my own oil but the product might be cheaper and at least you won't feel deep down that you're breaking the law.

"Not having to worry about the dark side of medical marijuana and to be able to go to a doctor and get some good product would take that weight of your mind and you'd be able to focus on getting better. Part of beating cancer and getting well is your mindset."

John, however, fears that until someone in power has to go through what he is going through and others have already gone through the law won't change significantly.

"I've always said since the beginning the law will mostly not change until someone at the very top of our country, our government, is touched by what I've been touched by.

"I don't want to wish anything upon anyone, but it won't change until someone ... someone in Parliament gets this."

Hikurangi Cannabis Company is taking a keen interest in producing cannabis-based medicines but cannot start a commercial venture until there's a law change.

Managing director Manu Caddie said government's bill wasn't clear on what sort of regime would be set up for producing and purchasing medicinal cannabis.

He said National's member's bill provided more clarity and the government should incorporate some of it into it's own planned legislation.

The government still has the numbers to pass its medicinal cannabis bill when it returns to Parliament and has accused the National Party of playing politics by withdrawing its support.