Tougher rules are needed to stop logging operations from causing the devastation seen in Tolaga Bay at the weekend, a leading environmentalist says. 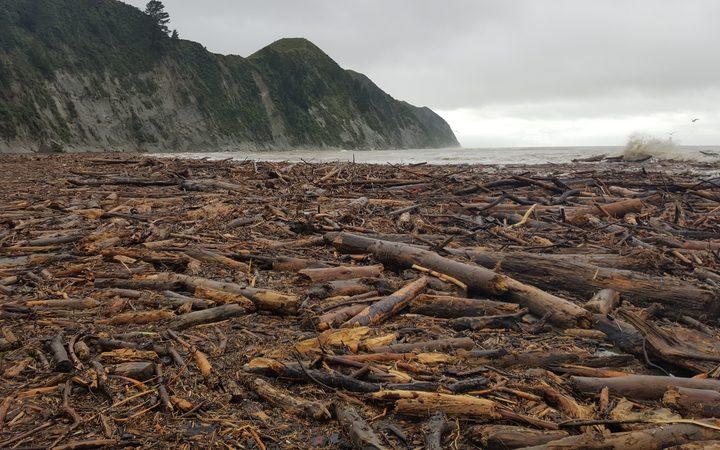 The National Environmental Standards for Plantation Forestry came into force just a month ago and were developed under the previous government.

Environmental and Conservation Organisations co-chair Cath Wallace said her organisation was frustrated by the development of the new standards under the old government.

She said the consultation process shut out environmental groups like hers, and as a result the new rules were still too lax.

Ms Wallace believed more substantial planting along the edges of waterways were required to catch a lot of the forestry slash.

"One of the difficulties is that the sort of imperatives or production from the companies often overrides their willingness to put those margins in place and protect the waterways - and of course it is not just the waterways as we've seen in Tolaga Bay - it is people's whole lives and houses getting wrecked," she said.

Former Gisborne District Conservator Trevor Freeman said the event at Tolaga Bay was the worst he has seen in terms of woody debris.

He was involved for eight years developing the new measures and said originally the standards sought permitted activity status, which meant no resource consent was required for some parts of the landscape.

He said while the final rules were improved, there were still "some susceptible land types" that did not require resource consents for either the planting of trees or harvesting.

Mr Freeman said the new regulations did not allow councils to put in more stringent rules and he did not think they were tight enough.

Following the events of the weekend, former Gisborne District Councillor and Ruatoria resident Manu Caddie had started a petition to get more controls put in place over where trees were planted and how they were harvested.

He had input into the new regulations when he was a councillor, he said, but he did not believe they would help the situation in Gisborne.

"While that National Environmental Standards policy statement is out now - it is not going to have a major impact on Gisborne because it was trying to actually weaken the Gisborne rules further and even as they stand, they're not strong enough," he said.

The council is investigating whether forestry practices are responsible for the debris, but said it was too early to confirm whether resource consents were breached.

A number of forestry companies are involved, but the council has pinpointed Hikurangi Forest Farms and PF Olsen as the main ones.

Four years ago, Hikorangi and the council reached an out of court settlement of $70,000 after the council alleged the company breached its consent, and damage occurred during a severe weather event.

Forestry Minister Shane Jones said the new rules were unlikely to be changed until they had the opportunity to take hold.

"The people that are wanting forestry restricted - I think they've got to allow such restrictions to be guided by facts - the facts of the matter are it could be that better management practices would have avoided what we are seeing through the media.

"Or it could be that some of the areas cannot and should not have exotic trees on them - they've got to have permanent cover," he said.

Officials will be surveying the damage on the East Coast by helicopter today.