Cyclone Hola is looking likely to hit New Zealand, and scientists say the tropical cyclone season is not over yet.

Tropical cyclone Hola, advancing towards New Caledonia's Loyalty Islands, is on track to head towards New Zealand, the third cyclone storm system to do so in the past six weeks.

"Based on current forecast track of Hola, there is a high risk of heavy rain and severe gales in Northland, Auckland, Coromandel Peninsula, Waikato, Bay of Plenty and Gisborne from early Monday through to Tuesday," MetService said in its latest severe weather outlook this afternoon.

The cyclone has been downgraded to a category two as it moves south between New Caledonia and Vanuatu.

NIWA announced last year alongside other agencies there was an above average risk for tropical cyclones to come close to New Zealand this season, due to La Nina weather conditions.

The average is about one ex-tropical cyclone a year.

He said there was a possibility the storm could reach a Category 5, but as it moves south and moves away from warmer waters, it will gradually weaken.

There will be no king tides coinciding with the weather event like with Cyclone Fehi, he said.

"That may not completely end the risk for coastal inundation, but it will at least minimise that risk."

Monday afternoon and Tuesday morning is the most likely timeframe New Zealand will experience impacts on the coast.

Forecasters will have more information on its path and its impact over the weekend, Mr Brandolino said.

He said this isn't the end of the cyclone season and there's also a possibility later in the month for another tropical cyclone further North in the Pacific. 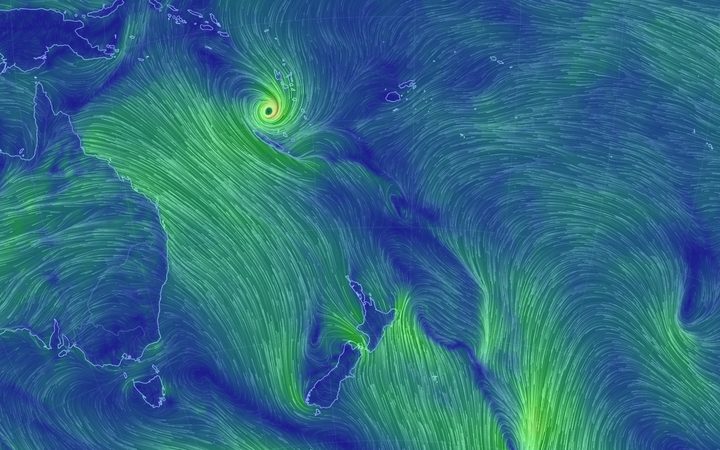 "If that happens we'll have to see where that goes and it may not even come towards New Zealand, but it certainly raises our awareness there's something out there and keep monitoring the situation," he said.

To prepare for Hola, he urged people to keep an eye on weather updates over the weekend.

Schools and businesses in the Loyalty Islands have been ordered closed and people are being urged to prepare for heavy rain, strong winds, and very rough seas.

Authorities in Vanuatu said gale force winds were expected to affect the southern Tafea and Shefa provinces until tomorrow.