Scientists may need to create a new Category 6 for cyclones as the effects of climate change make them more extreme, the Climate Change Minister James Shaw says. 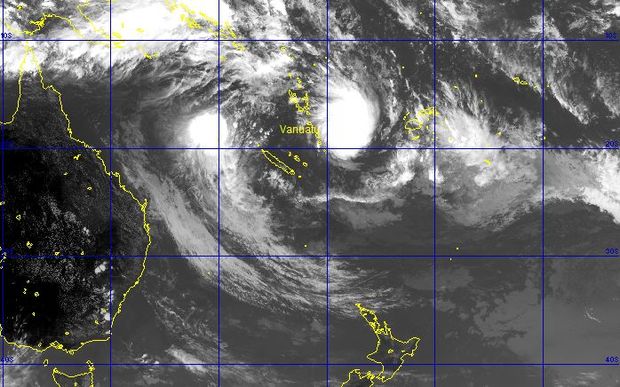 A satellite image of Cyclone Winston, to the right of Vanuatu, and Cyclone Tatiana, to the left, northwest of New Caledonia. Photo: Vanuatu Meteorological Service

Speaking at the Pacific Climate Conference in Wellington, Mr Shaw said cyclones were becoming more severe as the planet warmed and the wild weather that's hammered the country this week was becoming more frequent.

He said scientists were now able to say with some confidence that every extreme weather event was affected by climate change in some way and strengthening cyclones were now challenging weather classifications.

Cyclone Winston, a Category 5 cyclone, was one such extreme - it was the strongest cyclone on record and lashed the Pacific in 2016, killing 44 people in Fiji.

"MetService experts tell me that it had much stronger winds than the 230km/h upper-limit of a Category 5 cyclone.

"The only reason it wasn't a Category 6 cyclone is because we don't have a Category 6 - but we might need one in the future," he said.

She said the agency is already taking steps, but it was a discussion for the whole country to have.

"There's a huge road being built called Transmission Gully which is going to be a very resilient route compared with the current coastal highway which was closed yesterday because of the storm.

"In the event of earthquakes it will also be more resilient because it will actually be able to be put together and opened quicker than the current road.

"So we are already doing this."

Nearly 400 academics, scientists, policy makers and politicians are in the capital for the three-day conference.

American climatologist Michael Mann spoke yesterday and told the conference that climate change was happening faster and with greater effects than many climate models had predicted.

He said New Zealand and the Pacific were going to be particularly hard hit by changes in weather patterns.

"We're talking about a substantial increase in the risk of catastrophic coastal flooding and nowhere is that more apparent than here in the Pacific," he said.

Dr Mann said climate change had now arrived and was affecting people on a daily basis.

"Climate change is no longer a theoretical problem, it's no longer some far off distant threat."

Dr Mann said climate change was about taking care of the planet for the next generation, describing it as an issue of 'inter-generational ethics'.

"It is our imperative to act now so that we do not leave behind a degraded planet for our children and grandchildren."

The Prime Minister of Samoa, Tuilaepa Aiono Sailele Malielegaoi, knows those risks all too well and spoke of the need for urgent action.

"All of our efforts will be meaningless unless there is concerted and more ambitious effort by all countries to reduce emissions and scale up financial support for adaptation in vulnerable countries," he said.

Climate Change Minister James Shaw said he hoped to introduce a zero carbon bill to Parliament by the end of the year, which will include an independent climate change commission to help guide New Zealand to a low emissions economy and a net zero target by 2050.