Power companies, airlines, the Interislander ferry and Civil Defence are on high alert through the centre of the country as they wait to see what Cyclone Gita brings to New Zealand.

Here's the latest position & forecast track of Tropical Cyclone (TC) Gita at 8pm. TC Gita is expected to transition into a subtropical low around midnight tonight & will then be referred to as Cyclone Gita. What does it mean to drop the 'tropical' find out https://t.co/r6SB9mKNqN pic.twitter.com/DInvofePOx

The former cyclone - which devastated Tonga last week - is already bringing heavy rain which is expected to last for the next 24-48 hours. Severe gales are also expected to hit this afternoon.

The worst affected areas are likely to be Taranaki, the Kāpiti Coast, the Marlborough Sounds, Nelson, the West Coast, and the east coast as far down as Canterbury.

So far it is just a waiting game.

Grey District Mayor Tony Kokshoorn was expecting storm surges and more than 100mm of rain - in an area already struggling to clean up damage from cyclone Fehi earlier this month.

Following a meeting this yesterday, the Ministry of Education directed all Buller/Grey district schools to close for two days.

"It's a real relief because from 11am on Tuesday we are expecting 200mm of rain and winds from the southeast gusting up to 150km an hour," Mr Kokshoorn said.

He said the wind was due to start gusting around midday and loose roofing and other debris would be an additional hazard as students headed home.

"We don't want kids to be trapped at schools at 3pm by high winds."

CBD streets would remain open for the time being, but local authorities were continuing to assess the damaged Revingtons hotel roof to make sure it did not pose a debris risk to the street.

And Mr Kokshoorn said he might issue warnings to tourists and locals to delay journeys. Three weeks ago, slips, fallen trees, damaged roads and felled power lines caused by Cyclone Fehi left hundreds of tourists stranded on the West Coast.

Civil Defence has alerted 2000 campers on the West Coast with a special app with notifications.

Accommodation providers on the coast are also telling tourists about the cyclone.

In Marlborough, Civil Defence is asking campers, trampers and boaties to leave the area today if they can, or find themselves somewhere safe to hole up.

The Sounds could see 30mm of rain an hour at the height of the storm, and winds up to 130km an hour in exposed places.

"People need to keep an eye on rivers in particular, but also coastal areas. People shouldn't be out camping. People should be aware we expect some roads to potentially get flooded tomorrow and should limit their travel. Boaties should come ashore if they can, and need to be aware of debris at sea over the next few days."

#TCGita ️ is on her way! Make sure you’re prepared!
Clear your drains
️ Stay inside
Secure loose items
Delay travel
Stock up on emergency supplies
‍♀️‍♂️ Have an evacuation plan pic.twitter.com/7CFRl4Ew2X

Meanwhile, MetService meteorologist Lisa Murray said there were things people could do to get prepared.

"If you have animals in a paddock which is prone to flooding, consider moving them to higher ground."

North Island lines company Powerco is also hoping people will take extra care before the storm with anything that might damage power lines - taking garden furniture indoors, cutting branches that are near lines and trying down loose objects.

"Trampolines can be lifted up and because they are essentially like a big sail, they can hit the power lines. That means the power goes off and they act as a hazard to the system. Sometimes we've had trampolines actually bring power lines down. The same thing with garden furniture."

Mr Marsh said trampolines have at times been blown right into the next street.

"There are some areas around Taranaki that we know as 'tornado alley' and there can be really aggressive winds just in a space of 500-600 metres stretch of the coastline. And in a wind like that a trampoline can go 500 metres, no trouble."

People are at risk of electrocution if they go to rescue articles that have been blown out of their gardens and hit pylons, and should be extra vigilant. 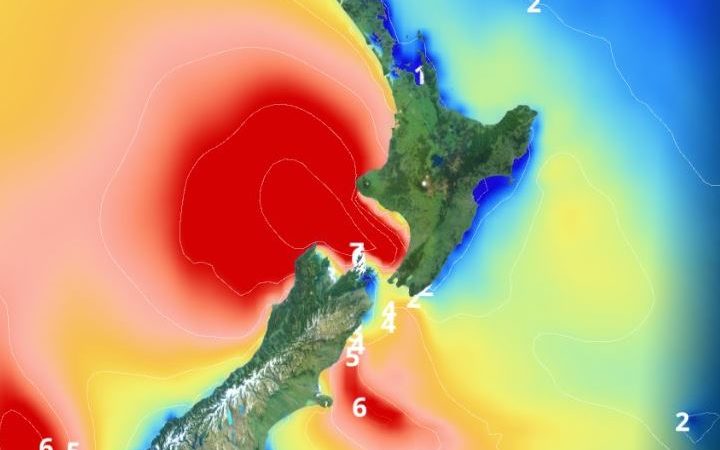 Gita will bring significant swells to many central and western areas, as well as the east coast of the South Island. Photo: MetService

Air New Zealand is already warning travellers to expect significant disruption to domestic and some international flights between today and Thursday this week.

While MetLink said buses and trains in Wellington will run according to schedule, commuters into the capital were being told to consider not coming into work tomorrow ahead of Cyclone Gita.

The storm is expected to peak in Wellington during the morning rush hour.

Flooding is expected on State Highways 1 and 2, and strong winds on the Rimutakas.

The Transport Agency said people should consider working from home if possible.

The Interislander ferry said sailing will be rough on tonight and Wednesday morning, but at this stage it isn't expecting to cancel services.

The latest MetService forecasts showed the cyclone arriving a band from the west across the south of the North Island and the north of the South Island.

See how the storm is expected to impact on NZ with an interactive map here: