Today's severe weather is set to continue into the night for parts of the central North Island. 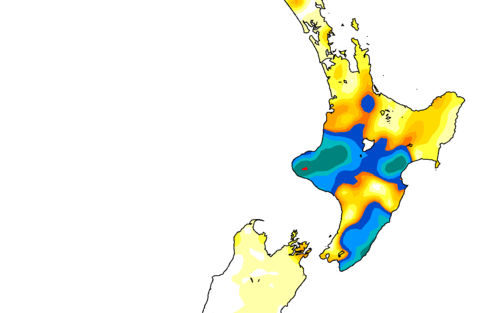 About 200 people were evacuated in Hawke's Bay this morning, and about 120 tourists have been trapped by slips at Blue Duck Station near Taumarunui.

More than 300mm rain had fallen in Hawke's Bay within 24 hours and thunderstorms in the area will bring some further downpours tonight.

The heaviest rain is expected to hit Wairarapa, including the Tararua District and Hawke's Bay, from Hastings southwards, until midnight tonight. A heavy rain warning is also in place for the Wairoa District and Gisborne south of the city until early Friday afternoon.

Hawke's Bay Emergency Management head Ian McDonald said up to another 90mm rain was due to fall in the area before 1am.

It was unlikely to cause further major problems, unless it all arrived at once, he said.

The low-pressure system is expected to move east tomorrow.

A heavy rain watch for Waitomo, Taumarunui, east of Taihape and in Whanganui was lifted, but isolated heavy showers are still possible until this evening.

Heavy rain has also been predicted for Northland, Auckland and the Coromandel.

A string of thunderstorms has emerged across the central North Island this afternoon, from Gisborne to central Waikato and then offshore into the Tasman Sea.

Remember, if you can hear thunder you're also close enough to the storm to be struck by lightning. Take shelter indoors! pic.twitter.com/H7zGuI2RTi

The pesky low pressure that is bringing rain to eastern parts of the North Island today moves away tomorrow, allowing rain to gradually ease. ^TA pic.twitter.com/bTDBmQcXeE

Road to Eskdale closed due to flooding pic.twitter.com/Nkjke69WLM