Rocket Lab's attempt at its second test flight has been called off for the day after it was earlier stopped one minute before take-off due to a rogue ship entering the launch area. 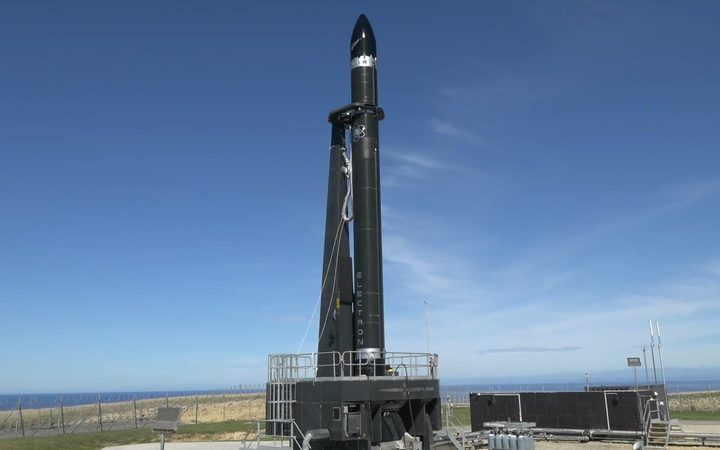 The Electron Rocket prior to its planned launch in January 2018 at Launch Complex-1. Photo: Twitter / Rocket Lab

The company tried to make a second test flight of its Electron rocket in December but high winds, an aborted launch and a power fault grounded attempts.

Today is the first of a nine-day window the company has to launch the 17-metre long rocket.

Earlier today their live-stream had an online audience of just over 10,000 when the countdown was stopped.

Rocket Lab posted on Twitter they were waiting for a vessel to clear.

Recycling to T-20 minutes and holding for a vessel to clear the launch area. #StillTesting

Planes, shipping and road traffic are supposed to be kept away from the Mahia Peninsula launch complex between 2.30pm and 6.30pm.

This time Rocket Lab is going to be carrying three satellites for paying customers.

The first successful flight was carried out on 25 May last year.

The company's launch window has been co-ordinated with New Zealand's aviation authorities and the US's Federal Aviation Administration.

Planes, shipping and road traffic will be kept away from the Mahia Peninsula launch complex for four hours from 2.30pm each afternoon during the nine days.

Rocket Lab chief executive Peter Beck said that although it was a test flight it was also going to be carrying three satellites for paying customers.

The satellites are an Earth-imaging satellite for Planet, and two Lemur-2 satellites for Spire, for weather and ship tracking.

"It is incredibly unusual. Normally you wouldn't expect to have customers on test flights," said Mr Beck.

"I think it's testament to the success of the first flight and the support and confidence in the team."

Mr Beck said the launch attempt would only proceed if conditions were ideal.

"Once again we're expecting to scrub multiple times as we wait for perfect conditions and make sure everything on the vehicle is performing as it should."

The launch attempts will take place between 2.30 and 6.30pm with another attempt tomorrow.

The attempts will be live streamed and will be available approximately 15 minutes prior to the launch attempt. It is available on YouTube and on the Rocket Lab website.