The hottest spots in the country on Sunday will be Invercargill and the deep south, a MetService forecast says. 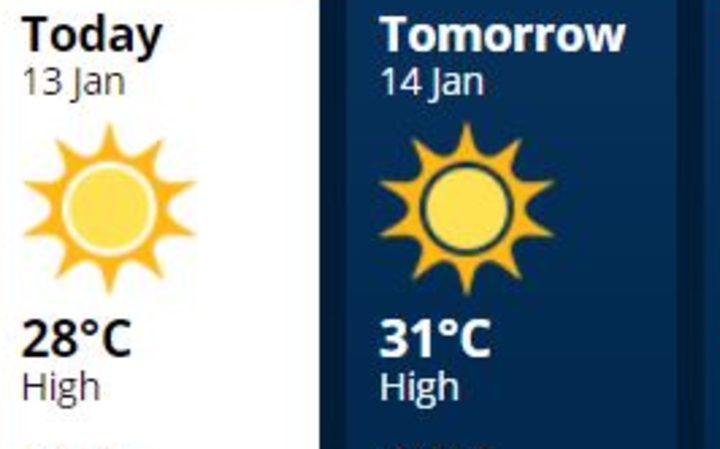 Invercargill is forecast to hot 31 degrees on Sunday. Photo: MetService

31 degrees forecast for Invercargill tomorrow - set to be one of the hottest days on record there (hottest ever 32.2C in 1921). See your area on https://t.co/Yjbq0jfCz1 ^TA pic.twitter.com/SZ2ISkXpAq

Alexandra is also forecast to reach 31°, Gore gets to 30° and Queenstown 27°, the forecast said.

A MetService 'sleeping map' said Sunday to Wednesday's forecast for the upper North Island will be warm and humid. By Thursday, there will be some respite but it remains warm.

The forecast said a deep low pressure system moves east over the Tasman on Monday, bringing wet weather to the country early in the week.

"During Tuesday and Wednesday, the low is expected to move east over New Zealand, bringing rain and strong north to northwesterly winds over much of the country. It is followed by a ridge on Thursday.

"There is high confidence of rainfall accumulations reaching warning criteria for Westland during Tuesday and Wednesday.

"In addition, there is low confidence of severe north to northwesterly gales in exposed places of the west coast of the South Island including Nelson and Marlborough and north Canterbury, and in the north and west of the North Island from Northland to Bay of Plenty to Wellington during Tuesday and Wednesday."