Communal living projects are gaining traction as an alternative style of living as traditional home ownership gets beyond the reach of many people. 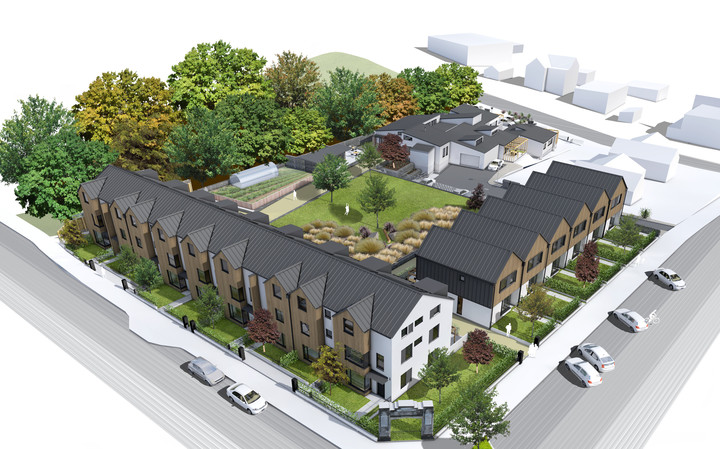 Co-housing involves family homes being built in clusters of up to 35, around shared living spaces, gardens and communal facilities.

The concept has existed in some other countries for more than 50 years but is now gaining in popularity in New Zealand.

The first New Zealand co-housing project was set up in Auckland over 20 years ago, but groups in Dunedin, Nelson, Christchurch, Masterton, New Plymouth, Whangarei and Hawke's Bay are now busy establishing their own.

As well as sharing communal space, residents also share duties, such as gardening, cooking and maintenance, making it virtually impossible not to know the neighbours.

Listen to Nine to Noon's story on co-housing.

Victoria University Head of Architecture Morten Gjerde said the Kiwi quarter-acre dream was not completely over, but modern buyers needed other choices.

"These times really demand us to look at other options," he said.

Law changes would need to recognise the different type of ownership involved in co-housing arrangements so the concept would require government intervention at some point, he said.

"It will be interesting to see what the new government is going to do."

A Christchurch-based community - The Viva! Project - was among projects being set up, with a site search underway.

"Following the earthquakes there was a lot of connectedness amongst Christchurch people and it was very much a feeling of, 'Wow, wouldn't this be great to extend this, to having people live in communities?'"

The co-housing style of living was much more affordable and an increasing number of people wanted smaller houses, she said.

"These very large houses we've been building in Christchurch aren't very economic, not for the general population.

"So building smaller houses, having a community house where there's a larger kitchen, so you can have a smaller kitchen and you wouldn't need a laundry in your house."

More than 600 people had registered their interest in the project.

In Auckland, Earthsong is New Zealand's longest-running co-housing project. It was set up in 1995, with 35 different households.

"Other communities might have other things that are really important to them [and] I think it's important to identify that very early on."

"I think the logistics could prove to be a little challenging if you break it down into various aspects, including resource consent and security from a bank's perspective.

The concept might not suit most New Zealanders, but would be interesting to watch develop, he said.