Civil Defence says two families who had to flee their homes after slips in Wellington will not be able to return until engineers have checked the properties are safe. 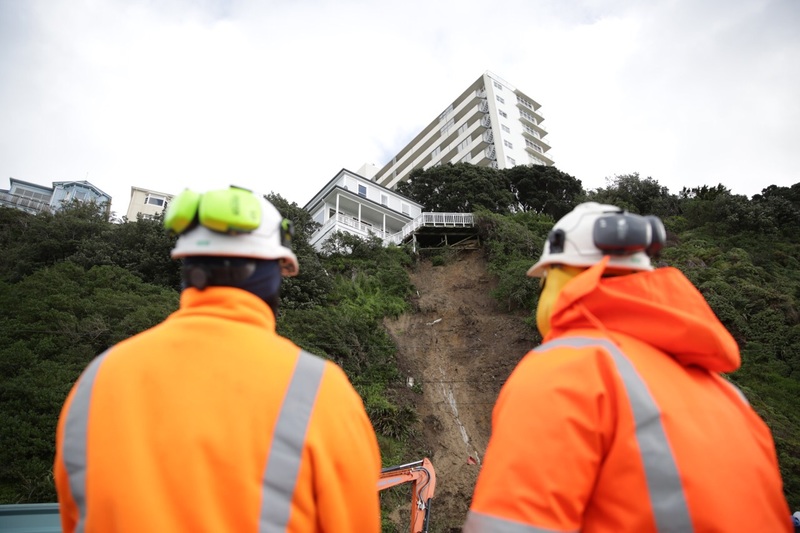 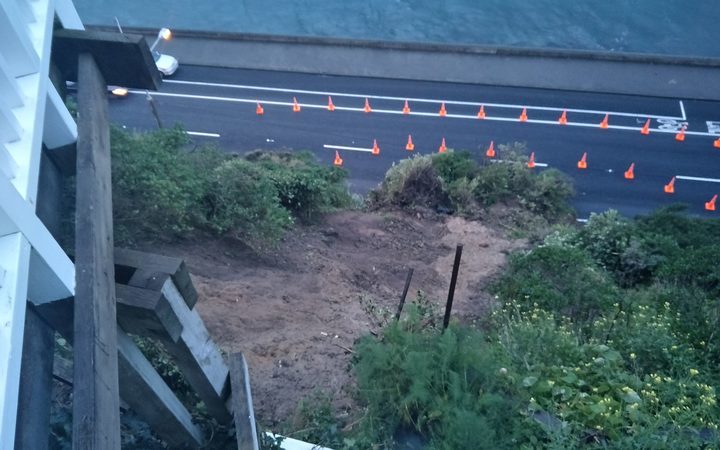 The slip below a house on Evans Bay Parade, as viewed from the house's balcony. Photo: RNZ / Jacob McSweeney 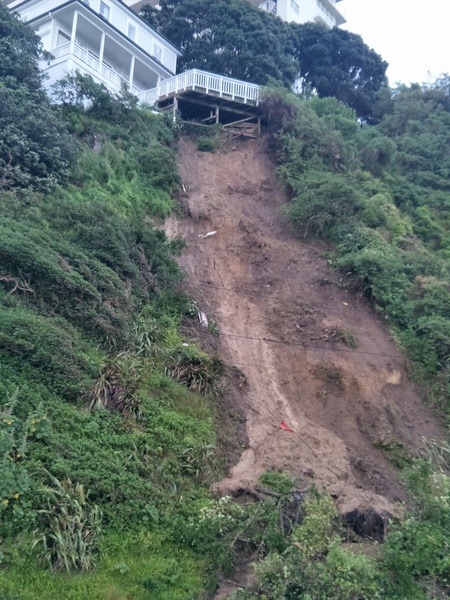 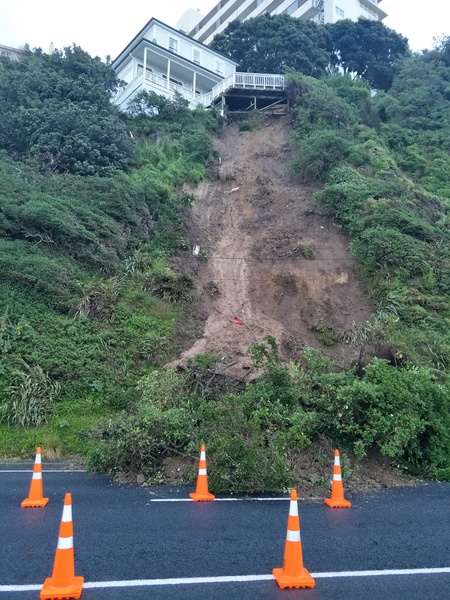 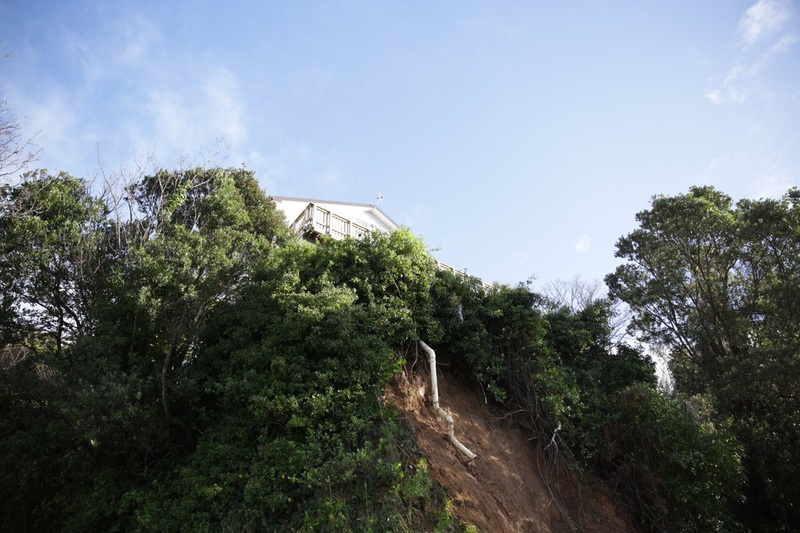 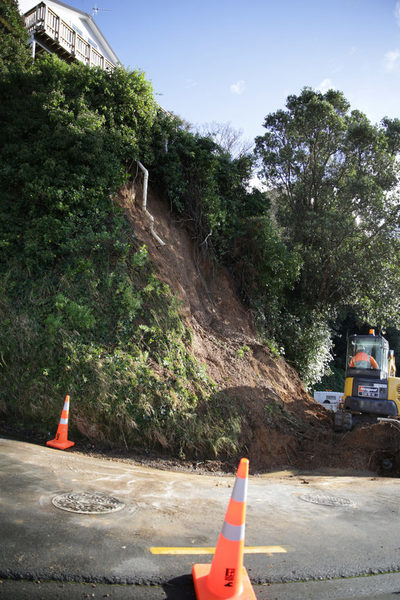 The slip in Devon Street. 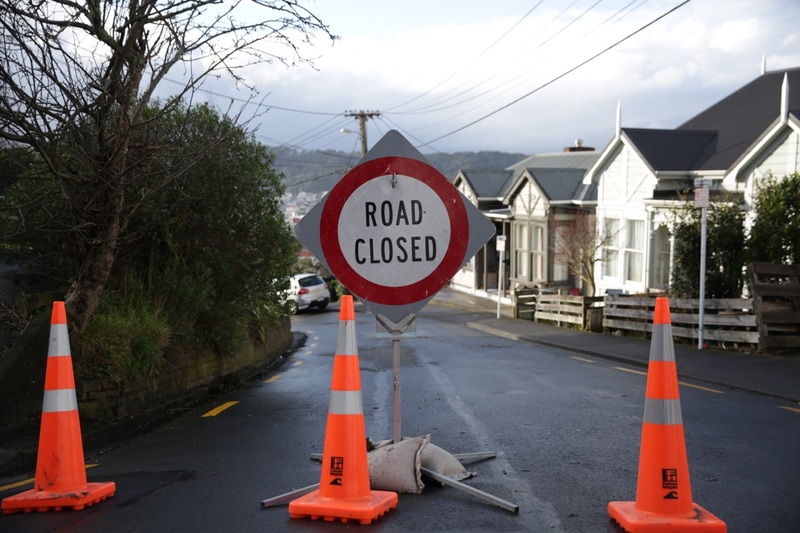 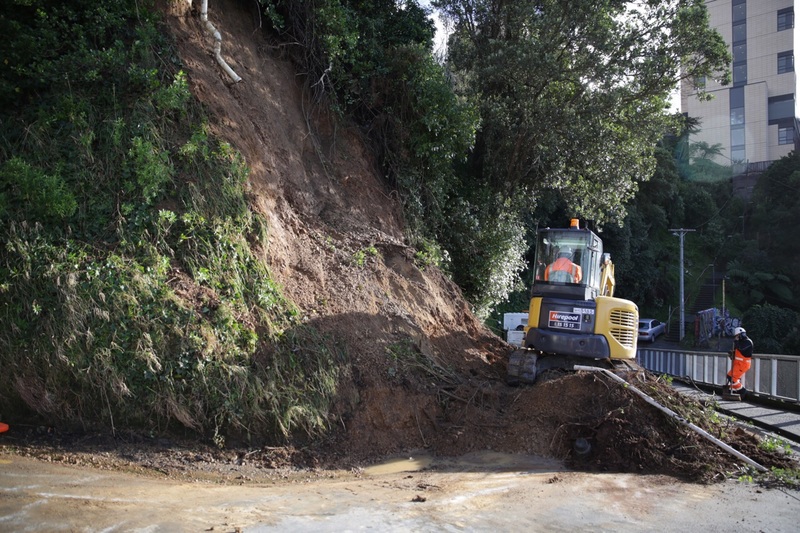 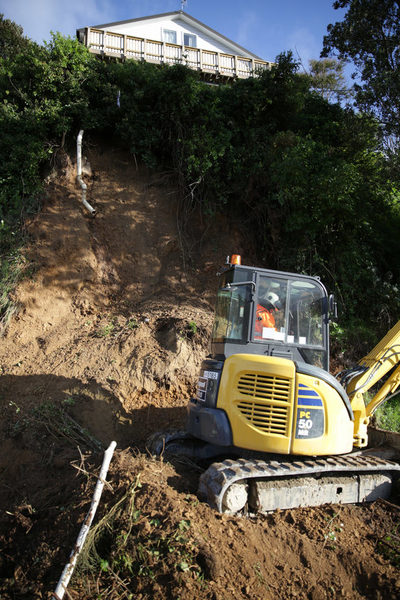 The slip in Devon Street.

The Wellington Civil Defence Controller, Bruce Pepperell, has told Checkpoint that geotechnical engineers were carrying out investigations but it would be next week before they knew whether the houses could be occupied.

He said hilly suburbs, which include some of Wellington's premium real-estate, were especially at risk.

"You've only got to have a look at the houses, some of them are cantilevered out over cliffs ... but they're very nice houses, but if they're on a slope and you get rain then sometimes you've got to expect these sorts of things."

Mr Pepperell said the estimated 460 slips so far this winter were the result of high rainfall - 160 percent of the usual amount for July.

A two-storey house above a steep Wellington street in Aro Valley has been evacuated after a large slip and another large slip on Evans Bay Parade just past Oriental Parade, prompted the evacuation of four people.

Wellington City Council's spokesperson, Richard MacLean said the slip in Devon Street had carried away the property's waste water and sewerage connections, meaning toilets in the house were unusable.

He said council engineers were inspecting both properties to assess the damage, and possible safety issues.

He said there had been at least 460 landslips in the city this winter. It said of the 460 slips, 300 had been repaired and repairs were underway on the rest.

Mr MacLean said priority had been given to the larger landslides which were partially or fully blocking roads and footpaths or had safety implications.

He said some slips would need retaining structures to be built, while others would be stabilised with planting and subsequent monitoring.

The slip that closed Devon St was one of the biggest a resident, who lives further down the street, had seen in quite a while.

Tony Kennedy said it had made a big impact.

"This whole street is prone to slips but they are usually pretty small, and that one is pretty big by Devon St standards," Mr Kennedy said.

"The deck (of the house above the slip) is pretty precariously placed relative to the slip. Obviously we have got leaking pipes which are not helping."

He added the slip was a potential danger for the public.

"You would not want to be driving down Devon St when that thing happened."

Mr Kennedy said his own house was not in danger, unlike the property further up the road.

An occupant of the house above Evans Bay Parade, Georgia Murray, said the slip happened overnight and she was not aware of it at the time.

She was later asked to leave her home on Maida Vale Road by contractors hired by Wellington council.

Her departure has come just two weeks after she and her flatmate took up their tenancy in the flat. A third flatmate was due to move in on Sunday.

"When we moved in we asked the landlord about earthquakes but we did not ask about slips."

She and her current flatmate would now stay with friends until an engineers report on the safety of the property was done.

"Hopefully, this will be just for the weekend, no longer than that."

Another slip is blocking the citybound lane on Ngaio Gorge Road, while yet another has come down on the corner of Branscombe Road and Ironside Road in Johnsonville, the council said.

Contractors would assess the slip which closed Devon Street overnight, between Aro Valley and Kelburn.

Devon Street is a popular short cut for commuters looking to avoid traffic in the capital.

The closure also includes pedestrian access to Victoria University, as well as Te Aro school via a walkway off Devon Street. 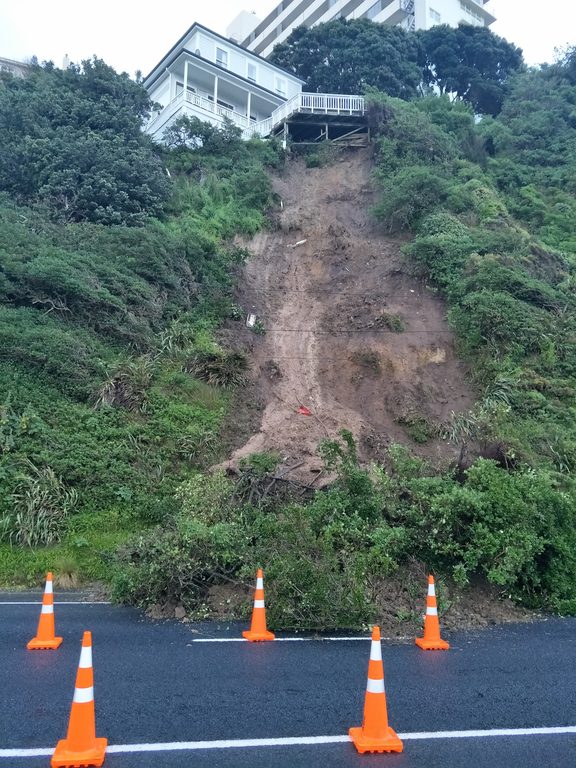 Police asked people to avoid the area if possible.

MetService said a particularly heavy rainfall of between 5 to 9 millimetres around 8pm last night may have contributed to the slips, adding water to already soggy soils.

Meterologist Tom Adams said in all about 25mm fell in 24 hours, a lot of rain in a narrow window of time.

RNZ's reporter at the scene, Jacob McSweeny, said the evacuated house was now in a precarious position just above the slip.

"From the front door, it's probably about 10 metres to straight cliff face," he said.

A large mass of earth mixed with trees and bushes had come down on to the road, mostly covering a section halfway down the street.

McSweeny, at one of those houses which overlook Miramar and Wellington Harbour, said the slip was bigger than the one on Devon Street.

"I can see through the wood slats of the deck that the earth below me has disappeared and there are several trees down at the bottom there."

Evans Bay Parade still had one lane open, being much wider than Devon Street which is one of the city's most narrow, winding and steep streets. 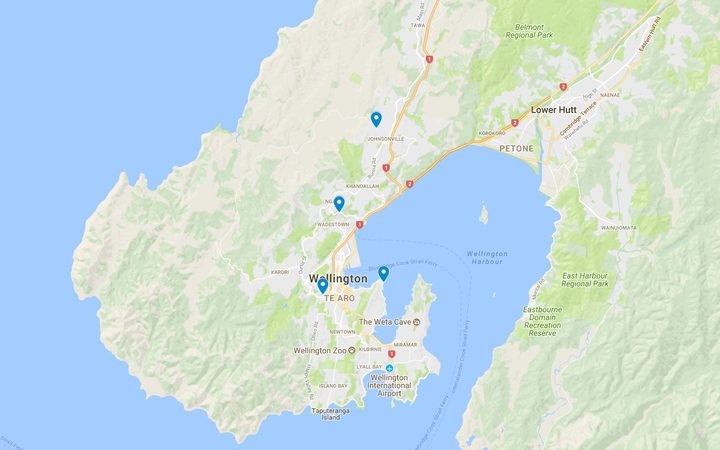