Some Otago businesses are reeling after this weekend's flood, saying it will cost them tens of thousands of dollars in lost income. 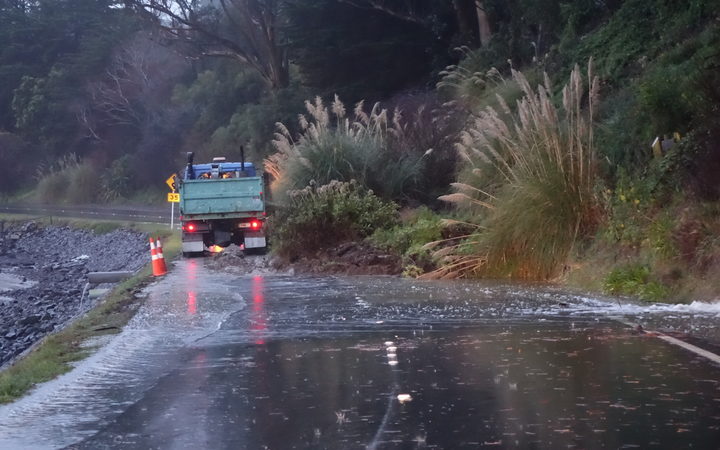 Businesses near Portobello, on the Otago Peninsula, were still cut off after the weekend's flooding that put Otago, Canterbury and Selwyn into a state of emergency.

Perry Reid's family have been running a tourism business on the Otago Peninsula for 18 years.

He had spent millions of dollars developing part of his 180 hectare farm into a wildlife reserve, which was now completely cut off.

Mr Reid said there were seven slips blocking access to his business, as well as the nearby Royal Albatross Centre.

"We need to get going as soon as we can... it could get very problematic," he said

Mr Reid said it could be weeks, or even months before customers could reach his farm again.

He said he had cancelled tens of thousands of dollars worth of tours.

"There was one quite big event that was happening in three weeks... that is quite a bit of money we are going to lose from that," he said.

Mr Reid said he had not yet been contacted by the Dunedin City Council, who managed the region's roads.

He said he was considering building a new access road himself, although he would prefer to keep the land intact.

"I don't want to. It's not only the money, but it's more scars on the land... we're into planting trees, not cutting them down," he said.

Dunedin's mayor Dave Cull said he did not know if the businesses cut off on the Otago peninsula had been contacted, but he said the city was doing all it could to ensure all of the slips were moved.

He said clearing the slips would be tricky, and would take time.

"In some cases if [the slip] is still moving at the top, you can't risk digging any more out or letting the public past it for fear it would all come down on them", he said.

Both Selwyn District Council and Christchurch City Council said it was too early to estimate the cost of the floods.

But Dave Cull said he expected Otago's bill to be big.

"It will be millions," he said. "We are working as fast as we can, but there is only so much you can throw against Mother Nature when it convulses like that."

Mr Cull said the mayoral relief fund used to assist residents affected by 2015 flooding had been relaunched, with $60,000 available.

He said it was available to residents who couldn't receive assistance from other avenues, and they could apply for up to $5000 complete essential repairs.