There are reports of new flooding in Christchurch, following this afternoon's high tide.

A Christchurch City Council spokesperson said there was fresh flooding on some roads in Heathcote, however this was expected to subside soon.

The spokesperson said water levels were lower than yesterday afternoon. 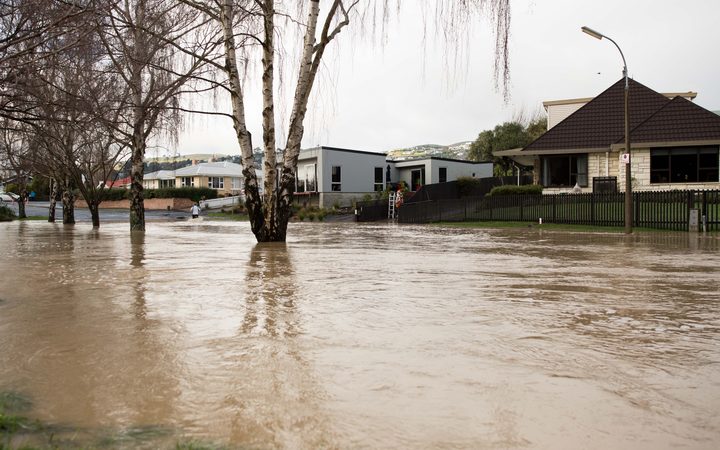 Meanwhile, the clean-up has begun for many Christchurch residents, with Martin and Leslie Heal having to clean sewage-contaminated mud from their driveway.

Mr Heal said the work that had been done in the Halswell area seemed to have prevented flooding in the last three years, but this was obviously exceptional.

Towns and cities across the southeast of the South Island are dealing with floodwaters in the wake of this week's winter storm. The weather is clearing, but states of emergency remain in place for the Otago region, including Dunedin and Waitaki, and for Christchurch and Selwyn.

Follow our updates on the flooding here and check our summary of essential information.

This morning's high tide in Christchurch was lower than expected and there were no overnight evacuations of the Southshore or Heathcote River areas. But the torrential rain that caused the Heathcote to burst its banks yesterday has filled nearby basins and they will take days to drain.

This afternoon's high tide was about 4.15pm and the Heathcote River had been expected to peak at 5.30pm.

Check out this interactive public information map of the emergency areas, with a live feed from NZTA showing road closures, cautions and delays:

Christchurch mayor Lianne Dalziel is asking residents to use less water to help relieve pressure on the wastewater system.

"Perhaps a little less flushing of toilets and shorter showers and minimise the washing that's being done at the moment."

Ms Dalziel said emergency response teams had been talking to residents and assessing the damage and she expected to have an idea of the number of residents affected by the end of the day.

Earlier Ms Dalziel told Sunday Morning rain in the city had slowed, with the forecast ahead looking good.

She said while stormy weather had been expected in the city, the flooding that followed was unique.

"The low pressure out to sea and pushing in the tide, so really getting a wall of water in behind the tide, that really created something that we hadn't seen here, really, for a very, very long time."

Officials would be monitoring the next high tide and would make a call about whether the city's state of emergency needed to stay in place, she said.

"Sometimes I think it's better to keep it in place for a little bit longer than maybe is required, just as a precautionary measure."

Ms Dalziel said the response teams door-knocked up to about 80 to 100 houses yesterday morning, and a lot of people had already made the decision to leave their homes based on earlier advice. 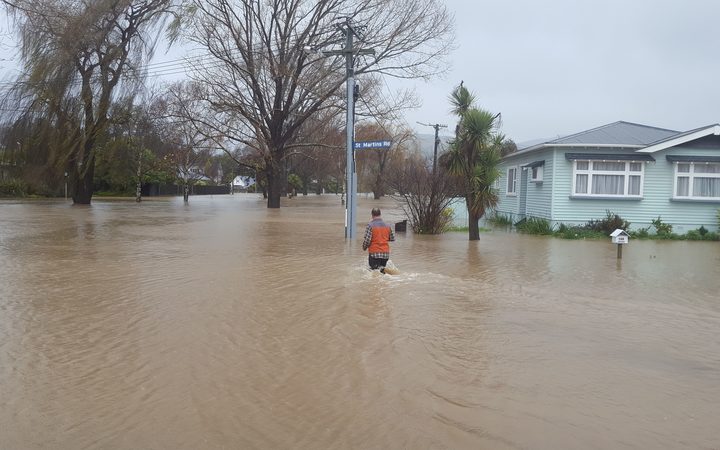 Duane Burgess heads back into the floodwaters in Christchurch on Saturday to deliver some medication to a friend, whose house on Riverlaw Terrace is now surrounded with water. Photo: RNZ / Rachel Graham

The floods were a reminder that Christchurch still hadn't recovered from the 2010 earthquakes, she said.

"Our land drainage recovery programme is a... multi-million dollar programme over many years, and we have systematically been going through the areas of Christchurch that require additional work."

She said the worst affected areas in Christchurch were the lower reaches of the Heathcote River.

The areas affected by the last major floods in Christchurch in 2014 had not been affected - which showed the land drainage recovery programme was working, she said.

But some residents living near the Heathcote River told RNZ they were shocked at how quickly the city's rivers flooded during the rainstorm over the past few days.

Catherine Ryan said her family was stuck inside their house last night, surrounded by the rising water.

She had seen the river rise to similar levels before, with earthquake-damaged infrastructure struggling to handle the excess water, but was still surprised at how quickly it flooded this weekend. 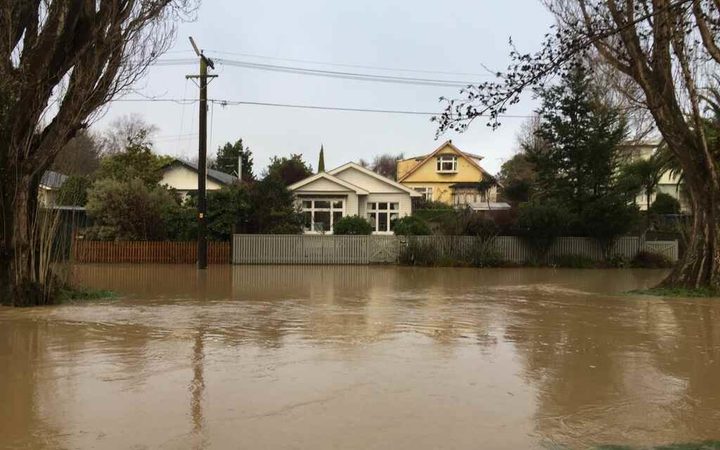 Floodwaters near Christchurch's Heathcote River, including on Eastern Terrace, pictured, were high but receding on Sunday. Photo: Sean Scanlon

Floodwaters likely to be contaminated

Christchurch Civil Defence Controller Mary Richardson said the floodwaters were likely to be contaminated, so people must wash their hands if they came into contact with any.

She also said that while the mains water supply was safe to drink, people should keep their use of it for other purposes to a minimum.

Water on Banks Peninsula would be supplied by tankers and safe for drinking, Ms Richardson said.

The welfare centre set up at Linwood College closed last night as many of those evacuated chose to stay with friends and family instead.