A state of emergency has been declared in Otago and Timaru as heavy rain continues to fall over the lower South Island. 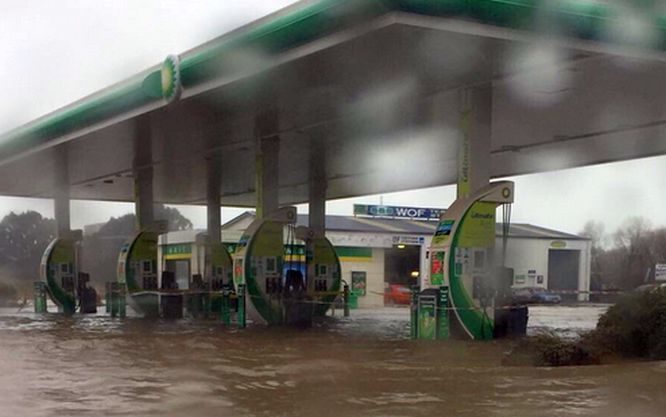 Flooding at a service station in Timaru. Photo: Supplied / NZDF

The Taieri Plain south of Dunedin is on track for its second-largest flood on record.

Dunedin Civil Defence said the Taieri river was flowing at 1200 cumecs, and at 100 cumecs the Taieri floodgates were normally opened.

The civil defence controller, Sue Bidrose, said that was because they had been working to evacuate all the farmhouses and stock on the land which will be flooded once the gates are opened.

Dr Bidrose said police have also door knocked the Henley township, advising people to leave their homes for higher ground. She said civil defence would help people into motels in Mosgiel where needed. In all, about 50 houses should be evacuated.

She said South Dunedin was bearing up well in general, but the city council wanted anyone who was affected by flooding to call its main number so it knows what is happening and who needs help.

Dunedin mayor Dave Cull said the situation in the city was beyond the resources of emergency services alone, and a State of Emergency meant extra powers were available to respond.

Due to heavy rain infiltrating into the wastewater system, manhole covers have been forced up in Surrey Street, South Dunedin, and on North Road in North East Valley.

The system backs up at certain bottleneck points and overflows onto the road.

The overflows are contained on roads, but people should stay out of floodwaters in these areas and treat them as contaminated.

The Dunedin City Council has opened all available bypasses to alleviate pressure on the system.

An Emergency Management Centre has been activated in the city, with officials working to send sandbags to North Otago because they have run out.

Heavy rain in the South Island has broken records in Oamaru and Timaru, with the wet weather predicted to continue through until tomorrow.

A state of emergency has been declared in Timaru, where 67.4mm of rain fell between 6am and 6pm today.

The previous record for the wettest July day was in 1908, when 111mm fell.

Ashburton received more rain than the average for the whole month - 64mm - with 76mm falling between 6am and 4pm.

Emergency management staff in Otago are on watch as heavy rain causes flooding across much of the lower South Island.

Authorities are warning against any unnecessary travel tonight.

Timaru District Council said the significant rainfall coupled with rising river levels from rain in the foothills meant flood-prone areas may need to evacuate at short notice. The council said anyone who felt unsafe should leave without waiting for official word.

Timaru Civil Defence said it was still monitoring the situation closely, with its emergency management centre staying open until morning if anything takes a turn for the worse.

However, Stephen Doren said things were calming down a little although there was a lot of flooding on roads and anyone with worries about flooding should check Civil Defence's Facebook and website.

Civil Defence has also swung into action around Oamaru, with residents already evacuated from Wallbrook Crescent.

There is surface flooding on many streets in the town, two bridges are underwater and fears are held for another.

Otago Civil Defence manager Chris Hawker said the Waitaki District Council had used up all its bags and arrangements were being made to see if extra bags from Dunedin could be shifted there.

He said people should notify emergency services quickly if urgent issues arise and ensure they can get out of their property easily if they do need to evacuate.

His team will be on duty overnight monitoring the situation.

The Otago Regional Council flood management team said several rivers, the Kakanui, Shag and Taieri Rivers, the Silver Stream, Water of Leith and the Lindsay Creek, are all rising steadily.

Surface flooding is affecting roads across the region, particularly in coastal areas but also in the Central Otago District.

The Army has sent about 20 soldiers in a convoy to help with the floods, and placed 60 more troops on standby. He said the soldiers - in nine trucks and an ambulance - will be able to help evacuate people, distribute sandbags and deliver food and supplies.

The Fire Service has also been called to homes in Ashburton, Timaru, Rakaia, Methven and St Andrews.

The Ashburton District Council has issued a boil water notice for the Montalto water supply area.

The council said the water in the area was murky, which was likely to be caused by the high rainfall.

It said the treatment plant equipment was operating normally, but was less effective during periods of high turbidity and as a precaution people should boil water used for food preparation or drinking.

The Transport Agency is advising motorists to avoid travel on State Highway 1 between Christchurch and Oamaru.

It said many parts of the road are near impassable and conditions are treacherous and roads may close at short notice.

A Public Information Map, with live feeds from NZTA:

Authorities are urging drivers to delay journeys south of Christchurch or north of Dunedin today, with significant flooding on State Highway 1 from Timaru to Dunedin.

The highway is also closed by flooding near Waimate. 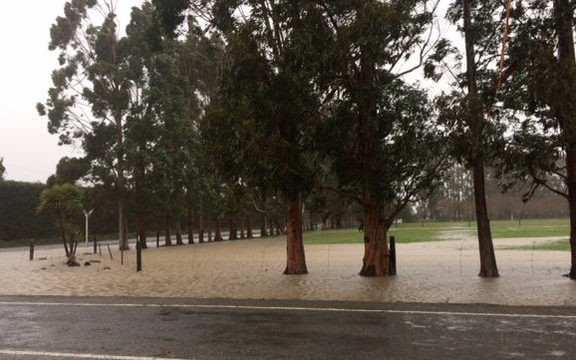 In Christchurch, Avonside Drive near the Stanmore Road intersection is flooded, and Emmet Street between Stanmore Road and Briggs Road is closed due to flooding.

On the Banks Peninsula, State Highway 75 from Duvauchelle to Takamatua is closed due to a slip.

Another slip has closed one lane of SH79 from Geraldine to Fairlie in South Canterbury, and SH1 from Hundalee to Kaikōura is also closed.

State Highway 1 south of Kaikōura has closed after being open today.

In Otago, Gladfield Road near Mosgiel is closed due to flooding.

Both SH1 south of Kaikōura and the inland road are closed until at least early afternoon, cutting the town off.

South Dunedin was seriously flooded in June 2015 and other floods in the city have affected the CBD.

But the council said it was prepared for today's heavy rain and had made sure the stormwater system was clear and sandbags were ready to go. 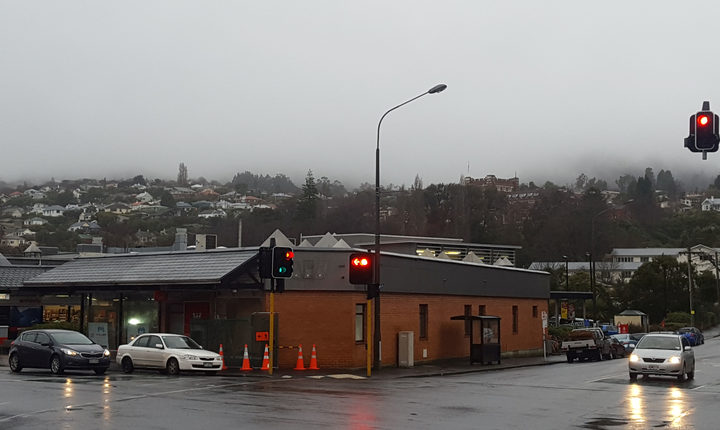 Today's rain follows last week's winter storm, which closed many state highways throughout the country and cut power to thousands of homes.

The latest rough weather hit Bay of Plenty about 9pm yesterday with wind gusts of 100km/hour in Whakatāne and 90km/h in Rotorua and Taupō.

Parts of the region had 50mm of rain between 6pm and 6am, most of it late in the evening.

On roads in the region, a fallen tree blocked SH2 at Matata, in the Whakatāne district, between Mimiha Road and Pikowai Road, while a slip blocked a section of SH2 near Herepuru Stream.

The fire service said it had attended 36 weather-related incidents in the northern part of the country. A spokesman said most of the calls were because of trees across roads, but there were two incidents where roofs were lifting. Auckland had about 30mm of rain.

Electricity is being gradually restored to about 500 homes in Bay of Plenty - most between Taupō and Rotorua - that had lost power overnight. A further 3500 households lost power in Taupō during windy weather but most have now had electricity restored.