Whangamata residents were in limbo last night, waiting to see if there is going to be another torrential downpour before they can even start thinking about cleaning up their flood-devastated properties.

Late summer storms have swept across much of the upper North Island in the last 48 hours, with lightning strikes in Northland and flooding and slips from Clevedon to the Coromandel Peninsula.

Michael Robertson has reluctantly found a new home - the local motel - because his house is teetering precariously above a big slip in Whangamata.

"At 1.30am, 2am, we heard a bit of a sound but because of the heavy rain couldn't see anything. In the morning, about 7am, when daylight came up, I looked out my front terrace to see about 500m³ slipped into the house below."

The council has deemed the house unliveable until remedial work was done - and Mr Robertson wondered if it would even last the night.

"There's water pressure underneath the ground under our house and the rest of the driveway. They're too frightened that with [the] 150-200 millilitres of rain that might happen tonight, the whole house might end up down there as well," he said. 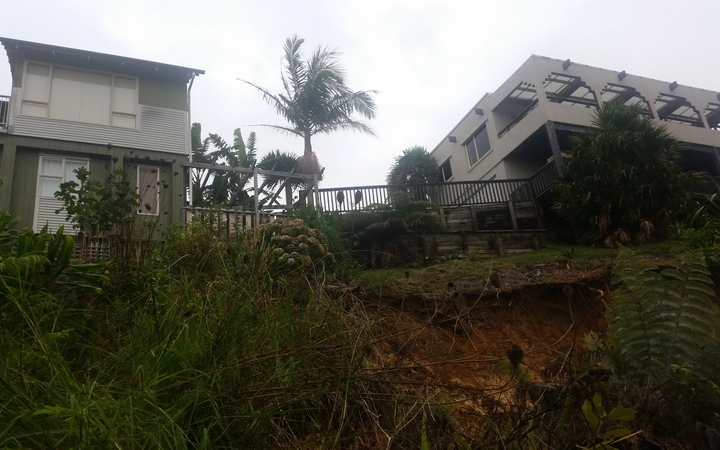 Michael Robertson's house, right, is at risk of heading down the bank in another downpour. Photo: RNZ / Eva Corlett

"Two bedrooms, bathroom, kitchen - we've got two houses on the property and one was completely flooded."

But like many other residents, he said he could not even start to clear up the mess.

"It's slowly drying out, it's drained away now, but there's not much we can do until the next bit of rain, that's what they're telling us."

With more rain expected in the region tonight, people have been advised to stock up on food and water.

Hauraki District Mayor John Tregidga said people should have enough supplies to last for seven days in case they were cut off by floodwaters.

More than 450mm had fallen in 24 hours and Civil Defence was expecting another 120mm overnight.

Emergency crews have been busy clearing roads, slips and waterways right across the Coromandel after yesterday's downpours and flooding. All roads were now open except the highway from Waihi to Whangamata, which would stay closed until 5pm tomorrow due to large slips and a downed power line.

The NZ Transport Agency said one lane into Whiritoa was now open for emergency access.

'Had it been the middle of the night, it would have been a different story'

The clean-up is also beginning in flood-hit areas south-east of Auckland.

Yesterday, the Stitches Upholstery workshop on North Road - not far out of Clevedon - was surrounded by knee-deep water.

Most of it has drained away and owner Nick Cunnold said they were lucky they did not suffer any serious damage.

"With the help of neighbours, everything got put up on higher benches. All the vehicles in here, we got them out to higher ground, so we were lucky. Had it been the middle of the night, it would have been a different story."

While there was a fair bit of mud and silt for Mr Cunnold and his employees to clean up, he said it could have been much worse.

"We were on top of it when it happened. If it had been during the night and no one was here, the furniture that's in here would have been ruined. A lot of water's gone under the wooden benches, which are fixed, so that's the hard part, you start getting the smell. That's the biggest damage, but that's just a bit of manpower to rebuild some of the timber." 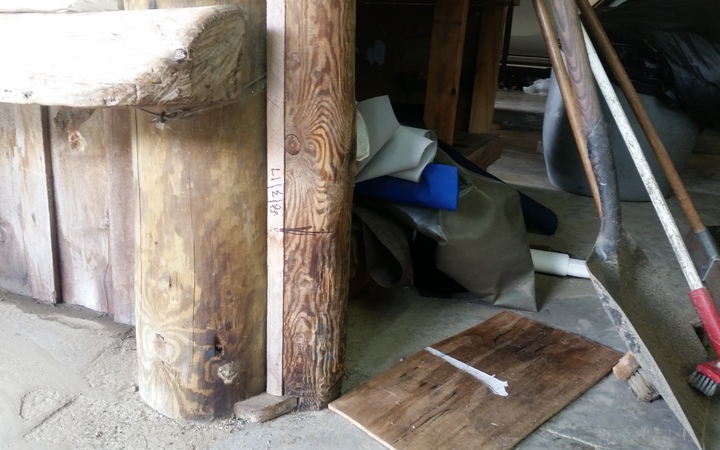 The clean-up is under way at Stitches Upholstery' workshop near Clevedon. Photo: RNZ / Sarah Robson

"We couldn't get here, so we had to go up on to our top field and everything you could see was water. At its deepest I suppose it was chest height, all the way to the road, across the road. It's taken out the fencing, it's taken out the actual road, so they're going to have to re-lay the road, there's big holes as if it's fallen away, like sinkholes."

And today, Ms Marshall said while a lot of the water had drained away, they have been left with a lot of mud

"We have been left with an inch or two of just slushy, thick mud, which is covering everything it touched - the clubhouse inside and out, the actual polo field, the surrounds, some of it's two or three inches thick, well over your shoes - we've been left with a big clean-up job."

Clevedon Oysters general manager Keith Chandler said they had about 30cm of water through their factory.

"We spent all day yesterday getting most of the silt out of the factory, the workers have spent pretty much most of the morning cleaning the rest of the factory up, but then we've got the closures out on the oyster farms, so it's going to be another two weeks before we're harvesting again."