Roadworks near Tauranga have come to a halt after musket balls were found in what could be a defensive trench from the 1800s. 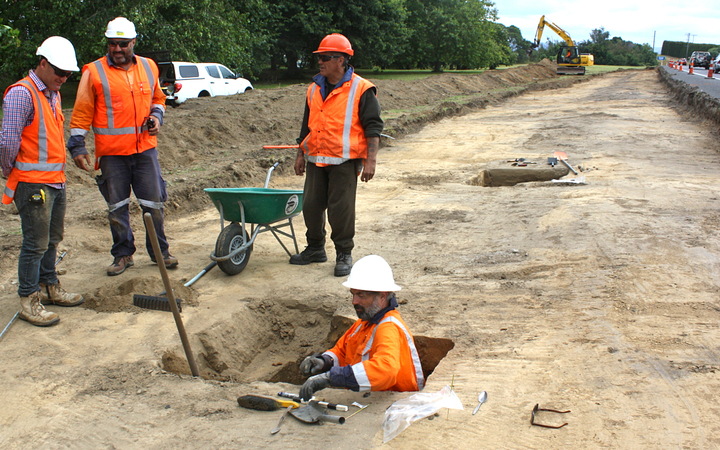 Contractors widening a Bay of Plenty highway found what appeared to be a military trench. Here, archaeologists are shown further excavating the site. Photo: NZTA

The site, on State Highway 29a in Matapihi, was previously identified as being in an area of archaeological significance for three hapū - Ngāi Tukairangi, Ngāti He and Ngāti Tapu.

Contractors found the trench while widening the side of the highway to install a safety median barrier. The work has stopped to allow the site to be examined.

NZ Transport Agency spokesman Niclas Johansson said it was early days, but the find could be significant.

"We expected to find kumara and fire pits and we have an authority from Heritage New Zealand for the works, but we did not expect to see something like this.

"This could be nationally significant so it's important that we keep the site closed and take the time now to find out as much as we can so we can honour the tangata whenua who were affected by this part of our history."

The 40m-long site will be excavated with all details recorded.

Project archaeologist Sian Keith said the site was away from other well-known battle sites around Tauranga, but could have been used as a coastal defence between the 1830s and 1860s.

"Depending on the date, it could add some important information to the national historic record."

Ms Keith said they had found musket balls in the trench.

"We don't know what we will find as we keep digging - I have never seen anything like this before, I've checked old maps and nothing is marked for this site.

"It's on the side of the road where the NZTA need to put a barrier to make the road safer - so once all the details are recorded it will be filled back in, but that in itself is not unusual."

She said the excavation could take another couple of weeks.