A 5.5 magnitude earthquake near Seddon this afternoon has been described as a short, sharp jolt. 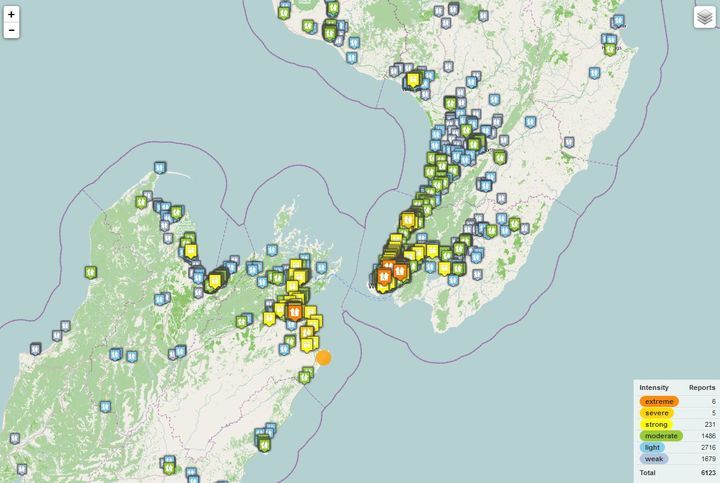 The quake struck about 4.15pm at a depth of 12km, about 10km east of the Marlborough town.

GeoNet said the intensity was "severe", and it was felt as far north as Auckland.

It is the latest in a series of strong aftershocks following the devastating 7.8 magnitude earthquake that struck the upper South Island early on Monday 14 November.

There were no reports of damage in Marlborough or Wellington.

His team had not been reconvened but people should not be complacent, he said.

The quake was also widely felt in Wellington and the Kapiti Coast. Civil Defence also said it would not be reopening its emergency centre in the capital at this stage.

That was a short, sharp one! #eqnz #wellington

Well that was a decent rolling shake here in kapiti. #eqnz

Felt that way up in levin #eqnz

The strength of the shaking was initially assessed as "strong", at a depth of 24km, but was upgraded shortly afterwards.

Both were strongly felt because they were both quite shallow, Dr Fry said.

"That second earthquake was triggered by the first one. So as the waves from the first earthquake were passing over the region, the dynamic stresses - or the time-dependent stresses - that occurred in Hawke's Bay, it caused it to generate an earthquake."

Thousands of aftershocks so far

The 7.8 earthquake on 14 November cut off Kaikōura from the rest of the country when it brought down huge landslips on State Highway 1. The town is still largely isolated, although weekday public convoys along the inland road did start last week.

Some landslips into waterways have formed dams, and scientists have been checking on 11 in North Canterbury and Marlborough that they say might breach.

In Wellington, hundreds of workers had to be evacuated from buildings in the wake of the quakes. Several shops and apartments were sealed off by cordons after a car park near Reading Cinema in Courtenay Place was found to be dangerous.

A building at 61 Molesworth Street in Wellington and a cinema complex and multi-floor parking space at Lower Hutt's Queensgate Shopping Centre will be demolished.

There have been thousands of aftershocks in the last three weeks, including at least 50 recorded to be magnitude 5 or greater.

GNS Science said earlier this weekend that just 14 aftershocks in the past week had been stronger than magnitude 4, but warned that could be reset by another large shake.

It said it could be years before the number of tremors dropped back to normal.