Thousands of holidaymakers could face a summer of highway misery because of earthquake damage to top-of-the-south roads.

With State Highway 1 either side of Kaikōura closed by slips and damaged bridges, traffic on the inland route (State Highways 1, 7, 65, 6 and 63) has more than tripled in places since the 14 November earthquake.

While some accommodation providers are reporting daily cancellations following the earthquakes, if few others follow suit, last year's figures suggest traffic on the Lewis Pass could rise to 8000 vehicles each day during the summer peak.

It is likely to spell more bad news for drivers, who already face at least a 7.5-hour trip between Christchurch and Picton - nearly three hours longer than it took along the coastal route, SH1.

The owner of a tea-rooms on the inland route said it was a case of "wait and see" if it would put people off their holiday plans.

Fixing the coastal route is a top priority but it has been estimated it could take months to complete repairs.

Bracing for the 'big wave' 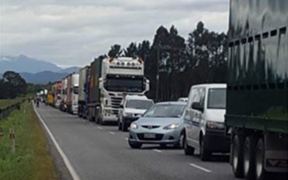 The official holiday period begins at 4pm on Friday 23 December and ends at 6am on Wednesday 4 January.

During this time, thousands of holidaymakers from Canterbury and further south usually make road trips to the Marlborough Sounds, Tasman or the West Coast.

Kaiteriteri Reserve Camp operations manager Den Petch said the first "big wave" of campers drove up from Canterbury on Boxing Day. They made up about 80 percent of bookings. The campsite was fully booked over January, with hundreds on the waiting list.

Their only road option for the foreseeable future was the winding inland route, which had several one-lane bridges.

Last year, the normal daily figure for the Lewis Pass was 1200 vehicles (northbound and southbound combined). That rose to 3000 during the summer peak.

This means potentially 8000 vehicles - including about 500 trucks - could be on the Lewis Pass each day this holiday period.

"In addition to the additional traffic already generated by the unavailability of SH1, we expect further significant increases due to holiday traffic," NZTA regional performance manager Pete Connors said.

Drone footage shows the damage to SH1, near Kaikōura, from the air:

Death on the inland road

Police have put extra patrols on the inland highway route and ticketed dozens for speeding or unsafe passing, yet it has already claimed a life. 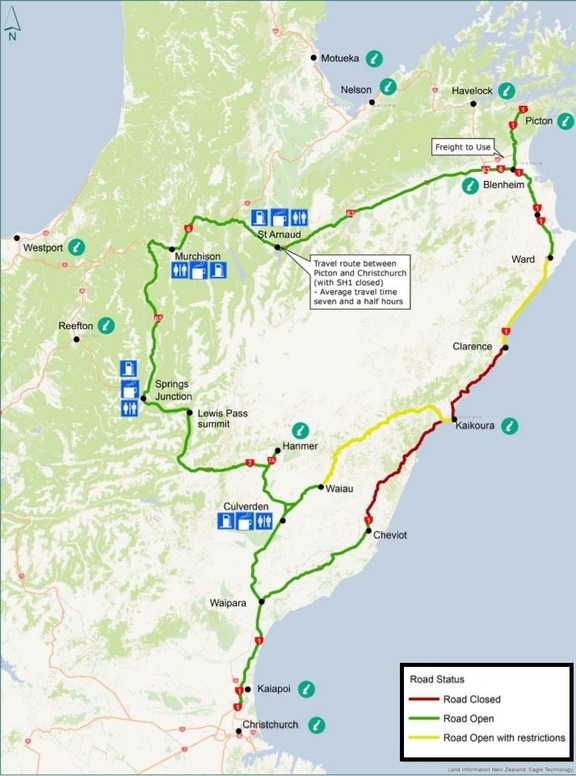 Public facilities along the route are under pressure from the influx.

The Buller District Council will divert $200,000 to put three to six extra toilet numbers at Springs Junction, where Mayor Garry Howard said trucks numbers had increased from about 60 to up to 800 a day.

According to one local, there were 10 trucks on the petrol station forecourt at any one time and queues for toilets year-round.

The cost of servicing the toilets was "a scary figure" - emptying septic tanks could cost up to $2000 a time - so the council might make the extra ones user-pays, Mr Howard said.

The potential for 8000 daily vehicles passing through the inland route over summer was "hard to comprehend".

"Would people stay home instead of travelling? It's all a wait and see."

She said yesterday's fatal crash was no surprise - "people don't know the road".

NZTA said engineers and road managers were looking at ways to improve the Lewis Pass route so it could cope with the extra traffic until SH1 re-opened.

With 28 moderate to major slips and four damaged bridges between Cheviot and Ward, that will take months - if not longer.

While Civil Defence started limited public access to Kaikōura over the inland route from Culverden yesterday, it would not help those who planned a pit stop in the town.

Kaikōura's Lazy Shag backpackers owner, Dave Stanford, told Morning Report there was no point in tourists staying in the area until it had recovered enough to host them.

The NZTA said road reseals on SH63, between the Wairau Valley and St Arnaud - where traffic volumes have tripled and truck numbers increased 10-fold - would get under way within days. More safety signs would go into the route as early as Friday.

Other work, such as road widening, would happen "as soon as is practicable", a spokeswoman said.

Its advice to drivers taking on the inland route?