Scientists are checking every few days on 11 landslide dams in Kaikōura and Marlborough that may breach. 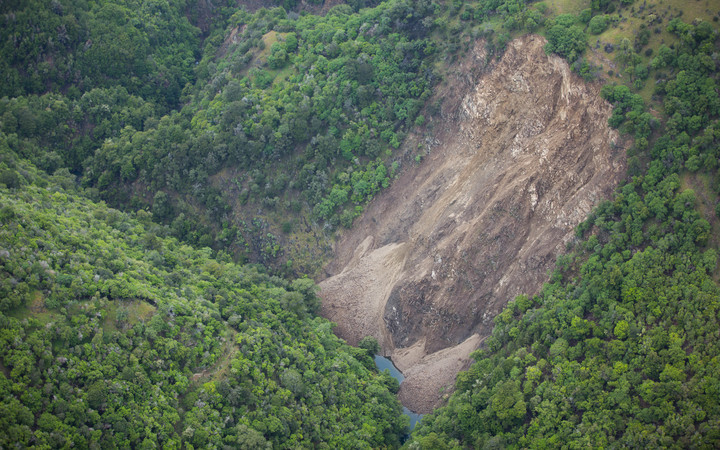 A slip into a waterway near Goose Bay caused a landslide dam. Photo: RNZ / Claire Eastham-Farrelly

Flyovers are taking place along with more detailed measurements.

A GNS 10-day aerial survey has found 150 landslides into creeks caused by the 14 November quake.

Some landslips into waterways have formed dams. Two in Marlborough and nine around Kaikōura are now on the watchlist.

GNS's initial modelling suggests eight would not cause downstream flooding if they broke, and more checks are being carried out at the other three.

These include Linton Creek, which is dammed up poses a low risk to a State Highway 70 bridge and a small school in its floodplain.

Civil Defence says the school, which currently has 13 pupils, has been informed it is at low risk, but an evacuation plan has been put in place.

An engineering geologist with GNS Science, Sally Dellow, said Ote Makura Stream above Goose Bay was at the top of the watchlist.

A dozen households have been allowed to return after evacuations last week, but 17 remain out.

The Hapuku River dam is the second priority, with those on the Linton and the Conway next since they are close to SH70. There is also a dam on the Towy above the highway.

"The dams are up in the high country and there's a wide floodplain before you get to the inland road so our determination is that the water, by the time it gets to the bridges, is going to go under the bridges and not affect the inland road," Ms Dellow said.

Civil Defence is advising people to stay out of the river valleys.

Water is building up behind all of these dams at varying rates. The greywacke rock dams, such as those above SH70, are draining better than the others.

The Leader River has two very large landslides on it, one of which has created a new lake.

"We've developed a priority list kind of from our collective experience and knowing what's the risk downstream," said Ms Dellow.

"These dams are not all full, so we do have a little bit of time and we are currently flying them twice or three times a week to take photos to make sure we are keeping track of what is happening at each of them."

The last flyovers were on 28 November and more are planned for today.