A farmer and Civil Defence officials are at loggerheads over the evacuation of properties south of Kaikōura, because of concerns an earthquake-created landslip dam could breach.

Seventeen people from 35 Goose Bay homes were evacuated this afternoon. Civil Defence and police called a public meeting at 2.30pm. Residents were told to leave immediately and prepare to be gone for at least 10 days. 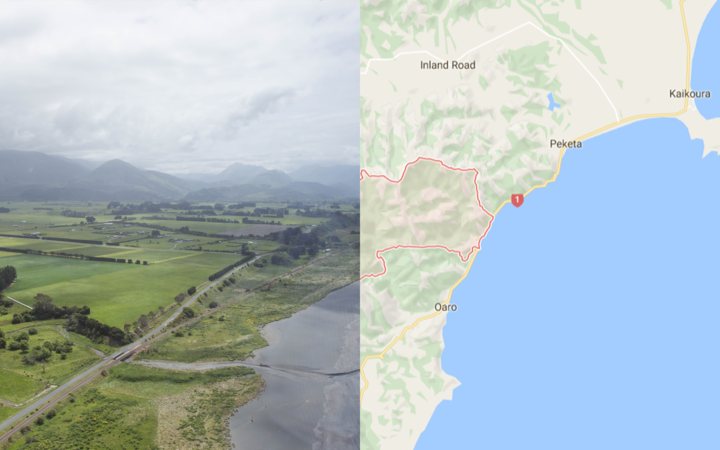 The view up the coast over Kaikōura, left, and a map showing Goose Bay - which is accessed via a track on private land. Photo: RNZ / Claire Eastham-Farelly / Google Maps

Paul Keung, who owns a farm in Goose Bay, said the evacuation was an over-reaction.

He claimed 10 men with shovels could clear the dam within a couple of hours.

Kaikōura's Civil Defence controller Murray Sinclair said the evacuation was based on advice from geotechnical specialists. It was a case of better safe than sorry.

Goose Bay is a 45 minute drive from Kaikōura, accessible via a 7km 4WD track through private land.

The slip was upstream of the residential area.

Civil Defence said the dam was about 5m high. Forecast bad weather meant there was a risk it could breach.

Residents were told to stay with family, friends or at the Recovery Assessment Centre in Kaikōura.

Mr Keung has been hosting a team of marine scientists working to restore sealife in the area.

After being told of the urgent evacuation, the team went up in a helicopter to check the dam - which he said was on his property. They found a small pool, he said.

Mr Keung guessed it was the size of about four swimming pools, about 1.5m deep and 20m long. He did not believe it was life-threatening.

When he told Civil Defence about what he had found, Mr Keung said he was threatened with potentially facing charges of manslaughter.

Mr Sinclair said it was a significant amount of water, and he was acting on the advice of geotechnical specialists.

"The last thing we want to do is not evacuate and then be told, 'well, you were aware of it, we should have evacuated'.

"If it means a bit of inconvenience we'd rather take that approach then leave people there and put them in harm's way," Mr Sinclair said.

Mr Keung had accepted the evacuation. He would move to a neighbouring farm.