Disagreement in Auckland over a proposed mooring for mega-cruise liners could leave them anchoring out in the harbour for a second year running. 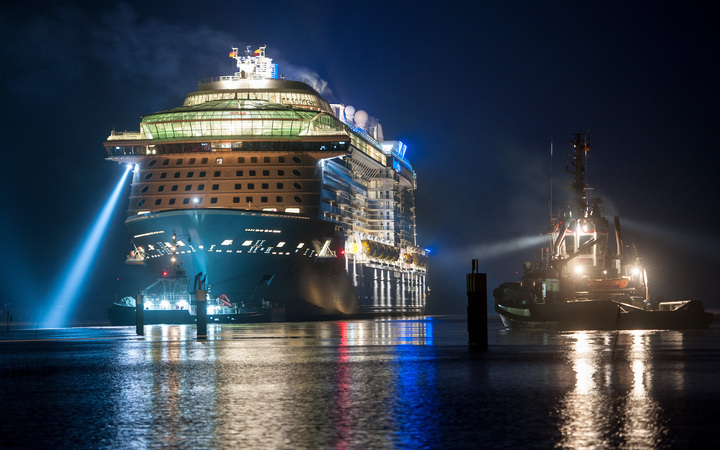 The Ovation of the Seas mega-cruise liner is set to visit Auckland four times in the next two years. Photo: AFP

The council's tourism agency Auckland Tourism, Events & Economic Development (ATEED) said the mooring structure may not be ready until the summer of 2018/19, after mayor Phil Goff challenged the need for it to include a multi-million dollar walkway.

The 348m-long Ovation of the Seas will visit twice this summer and become the first mega-liner to have to anchor in the harbour, exceeding the 320m limit on existing cruise ship wharves.

Both ships may have to anchor in the stream and shuttle passengers ashore by boat if the new structure is delayed further.

RNZ revealed last month that resource consents were being sought for a public walkway stretching 75 metres out from Queens Wharf, to link to the proposed structure called a "dolphin".

Mr Goff accepted the need for the "dolphin", to berth cruise ships longer than the wharf, but wanted the agency to justify its plans for a public walkway given there was opposition to further encroachment into the harbour.

A group of council-owned entities is involved in the project, including ATEED, Panuku Development Auckland, Auckland Transport and Ports of Auckland.

The group said the consent application was now on hold until early next year, meaning the mooring would probably not be ready before the 2017/18 cruise ship season, although it should be ready for the following year.

"This will give more time to pull together more detail to support the consent, including a risk assessment provided by POAL, on the implications of excluding the gangway," ATEED general manager of visitors Steve Armitage said in a statement to RNZ.

"An independent economic impact benefit report commissioned by Panuku will consider other waterfront and downtown projects," he said.

Ports of Auckland has said delivering workers to the 20m wide "dolphin" by boat was not an option on health and safety grounds, and the walkway was needed.

The statement suggested the council group would seek to justify the need to build the walkway as part of the mooring structure to Mr Goff, rather than redesign without it.