A secret multi-trillion dollar trade deal is prompting questions about whether New Zealand would be signing away its right to make some laws. 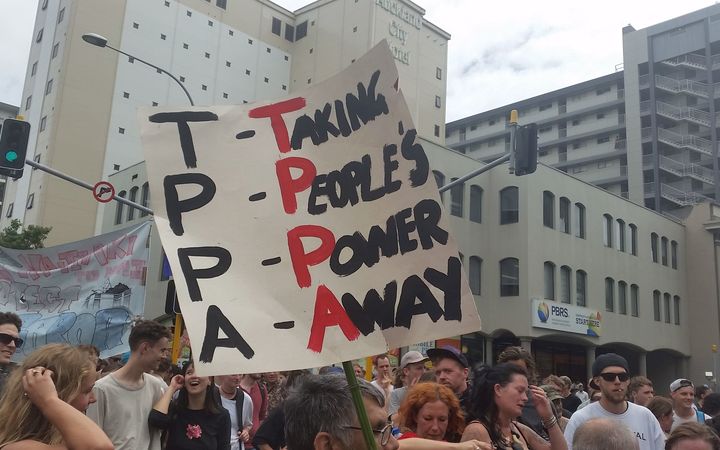 People protested against the Trans-Pacific Partnership around the country earlier this year over fears it would take away New Zealand's ability to regulate. Photo: RNZ / Murielle Baker

The Trade in Services Agreement (TISA) aims to liberalise service sector trade between 23 countries, including New Zealand, the United States and European Union.

While the fate of the Trans-Pacific Partnership (TPP) is dominating the headlines, TISA negotiations have continued largely unnoticed and negotiators are aiming to conclude the deal by the end of the year.

Service sector exports were worth over $20 billion to New Zealand in 2015, with $13 billion to countries that would be part of TISA.

New Zealand had "huge potential" to export more, he said.

"I'm thinking of law, accounting, engineering, where we have got some of the world's best people, but we have a potential price advantage over some of our competitors. But there are regulatory barriers standing in the way."

Mr Finny was confident New Zealand would not have to give up much because the country already had one of the most liberalised regulatory systems in the world.

"I was in Geneva last month and met with a number of government delegations. They confirmed Tisa is intended as a '21st century' deal for transnational corporations," she said.

"The new focus is on e-services, which will benefit the digital behemoths like Google, Amazon and Uber."

TISA was poised to go further than TPP with e-commerce, including no regulation of new technology services, Dr Kelsey said.

"So services that aren't yet invented, you sign away the right to regulate, and that's what's super-scary about TISA."

TISA also contained a 'standstill' clause that froze the current regulatory regime, and a 'ratchet' clause to stop countries reintroducing trade barriers that had been previously removed, she said.

Further leaked documents also indicated TISA signatories would be obliged to work toward treating renewable energy and fossil fuel power on an equal footing, threatening the goals of the Paris climate deal.

Trade Minister Todd McClay would not discuss New Zealand's position in the talks, but said the country's sovereignty was not up for negotiation.

"I give an assurance that when we go to negotiate we look to retain the right for the New Zealand government to pass law and regulation," Mr McClay said.

"We have that right under TPP and other agreements and certainly that would be my insistence upon a position our negotiators take."

Mr Finny, too, was confident that if New Zealand faced another disaster like Pike River, leaky buildings or finance firm failures, then the government would be able to act.

"Let's look at Pike River. We're talking about human health and safety - there'll be a blanket exemption there."

He would be "absolutely amazed" if New Zealand could not change regulations in response to something like that in the future.

TISA opponents remained sceptical, not least because of the familiar ring of secrecy surrounding the deal.

People were in the dark about what the government was prepared to sign away, Mr Coates said.

"None of this is anywhere near Parliament, so there is no accountability for New Zealand's proposals that they're putting into the negotiations," he said.

"These are big and really important issues. There's no transparency and no accountability."

Negotiators would review market access offers this week, and prepare the groundwork for a final deal in December, Todd McClay said.

While there was momentum behind the talks, he would not predict whether it could be concluded before Christmas.