A family home at Matawai west of Gisborne was totally destroyed by fire last night and firefighters suspect the cause could be linked to the major earthquake that hit the East Cape last week, the Matawai fire chief says. 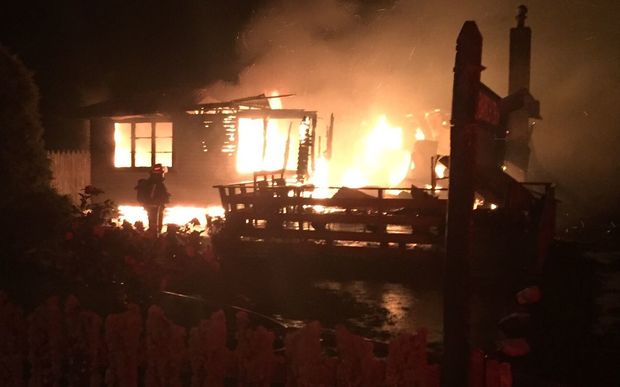 The house in Matawai, Gisborne, was totally destroyed by the fire. Photo: Supplied / Glenn Knight

Firefighters from three rural brigades were called to the Terrace Street home in Matawai township just before 7pm on Friday evening.

Matawai fire chief Neville Tohill said they were just preparing to enter the house to fight the fire when flames blew out the windows.

He said it looked like the fire entered the roof cavity through a huge crack in the chimney, which could have been damaged in the recent magnitude 7.1 quake that struck the East Cape.

A man in his fifties who lived there with his niece was checked over by ambulance officers for smoke inhalation but the pair were uninjured.

They got out of the house with only the clothes on their backs, Mr Tohill said.

He said it was important that people in the area check their chimneys for quake damage before lighting any more fires.