More strong aftershocks have rattled the East Coast with a 5.7 tremor among the shakes in the early hours of the morning. 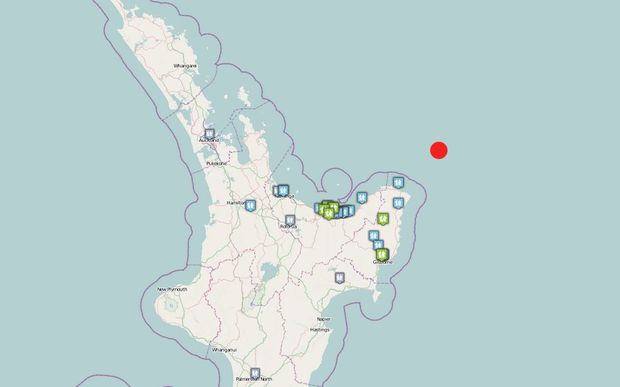 The 5.7 tremor, 95km from Te Araroa and 21km deep, was widely felt across the North Island. Graphic: GeoNet

The area was hit by a 7.1-magnitude quake off the coast of Te Araroa on Friday morning and hundreds of tremors have hit the area since then.

GNS Science has recorded more than two dozen significant shakes in the past 12 hours - the largest a 5.7 tremor recorded at 3.19am, centred 95km out to sea north-east of Te Araroa.

It was felt throughout the North Island including Wellington and Auckland.

GNS seismologist Caroline Little said this morning's earthquakes are part of the forecast aftershock pattern, and more small tremors should be expected.

"So those numbers are decreasing as time goes on, but there's definitely a small possibility of a bigger quake."

She said residents had been organising their emergency supplies since Friday's earthquake which had prompted a tsunami warning.

"Precious photos, all those kinds of things ... getting stuff in their cars - food for the kids, water - people are braced every day.

"You never know when the big one will come."

Police and fire service have had no reports of damage from the latest wave of aftershocks.