Farmers are being asked to help the Fire Service rescue another motorist stuck in flooding at the same spot where a family was trapped earlier tonight. 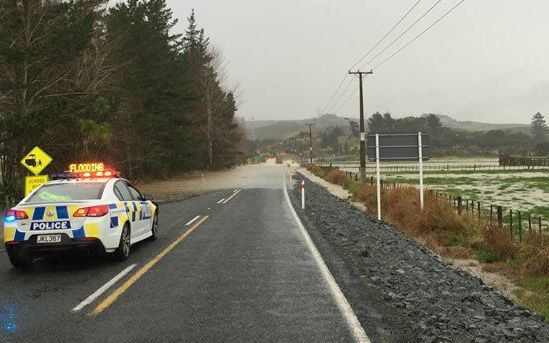 He said the water was now over the headlights.

Mr Phillips said they were approaching farmers to help move the car, which had a trailer attached.

Local resident Patrick Mason said people were still trying to drive through the floodwaters, despite signs warning of the flooding.

Mr Mason said he had seen about half a dozen cars get stuck and need to be towed away today.

As well as the four people who needed rescuing, he said a four-wheel drive had tried to cross the floodwater within the last hour.

He said the truck had to turn around after the water went over its headlights.

Mr Mason said the rain was not unusually heavy and the area was prone to flooding.

In the earlier incident, the Fire Service rescued the four passengers, who were stuck in waist-deep water on the road, just after 7.15pm.

They were called to the scene just before 6.30pm.

Another 30-60mm of rain was expected to fall over the past few hours north of Orewa, and also on Great Barrier Island.

The area has already had 110mm of rain in the last 24 hours, which has led to surface flooding and some road closures near Kaipara and in the Rodney area.

State Highway 16 has reopened after flood waters forced its closure this morning.

Weather is easing, however please do take care on the roads in the North of the region, there are road closures, slips and surface flooding.