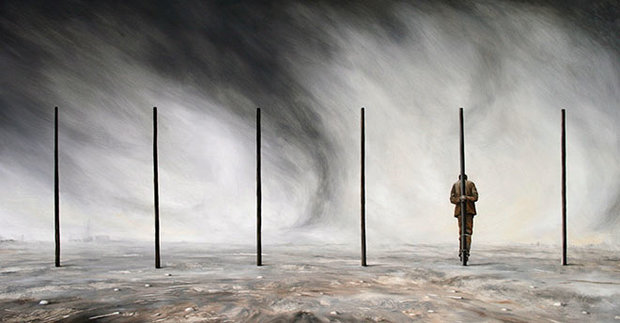 'Field punishment No 1' by Bob Kerr depicts what Archibald Baxter described going through on the front lines as he fought to avoid fighting in the army. Photo: Bob Kerr / Te Ara Encyclopaedia of New Zealand

The Ministry for Culture and Heritage has compiled lists of the conscientious objectors and dissenters during World War I.

And, for the first time, the lists of those men who chose to withstand public disapproval - or worse, beatings and jail - have been digitally compiled and publicly released online.

Senior ministry historian Tim Shoebridge led the project, and said the lists - one for imprisoned conscientious objectors, one with convictions for sedition and one of military defaulters - opened up huge new areas of research.

"One of them contains the 286 conscientious objectors who were imprisoned during the war," he said.

"You'll get their names and some biographical details as well as information about their sentences and punishment.

"About a quarter were socialists who saw the war as a capitalist-imperialist war. It was something they felt more kinship with the working classes of other countries than with the government of New Zealand.

Mr Shoebridge said the most famous of the 14 was Archibald Baxter, one of three men subjected to 'Field Punishment 1', which involved being tied to a pole or a wagon wheel, and forced to stand where those in the army could laugh and make fun.

"But the way Archibald Baxter described it, you were tied to a pole in such a way that all the pressure went on your hands and wrists and lifted your feet off the ground," Mr Shoebridge said.

"Your hands turned black and it was extremely painful, so rather than just being a humiliation it was actual physical torture."

He said the New Zealand and British governments did not want to make the men martyrs, but were keen to deter others from following their example.

"The authorities were worried that, if executed, they would become martyrs and that would strengthen that cause - but news of what had happened to them got back to New Zealand and it caused a major scandal and was a huge embarrassment to the government

"So the whole plan to have these guys be an example completely backfired."

One of the socialist objectors, Duncan McCormack, told RNZ's Spectrum in 1979 that some were prepared to go to jail to defend their beliefs.

"I'd definitely made up my mind that I would not go to the war and take any consequences whatever, 'cause we were prepared to pay the price."

Although they were vilified at the time, history came to view them in a different light.

Katherine Baxter, the granddaughter of Archibald Baxter, works at the Ministry of Culture and Heritage and said the lists were an excellent initiative, humanising those who opposed the war.

Victoria University of Wellington history lecturer Jim McAloon said the objectors were part of the history - of the war and of New Zealand - which should be remembered.

Dr McAloon said there was a sense of irony that the people who were labelled cowards had taken the brave step of standing up for their beliefs.