First Person - It is one of the lesser known battles of World War I involving New Zealand, but its success secured the Suez Canal for the allies for the rest of the war allowing them to concentrate on the Western Front. 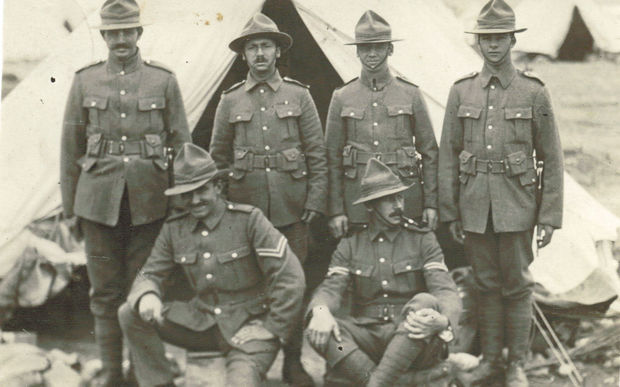 The battle raged in the early part of August 1916.

New Zealand troops had been in the Middle East since 1914 and members of the mounted rifles had fought at Gallipoli, albeit without their horses. Those that survived returned to Egypt and were reinforced from back home.

One of those sent to the Middle East in late 1915 was Cecil Crowe, a 38-year-old single man, who farmed in Rangiora. He served with the Canterbury Mounted Rifles and was my great-great uncle. 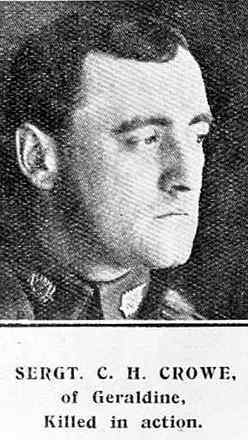 He sailed to Egypt on His Majesty's Troop Ship Tofua disembarking at Alexandria on Boxing Day 1915. He was promoted to Corporal in April 1916 and then to Lance Sergeant in May.

His army file reveals he suffered heat exhaustion and spent time in hospital at Port Said but returned to his unit in late May.

Conditions were tough with the heat, lack of water and hard riding.

Professor of War History at Massey University Glyn Harper said the hard riding for the mounted troops through the desert involved patrolling, reconnaissance and dismounting to engage in savage fighting.

"One mounted rifleman later said, I guess people back home will know this campaign is no picnic."

Professor Harper said the Ottoman forces put in a big effort to take the canal and were supported by German machine gunners and Austrian artillery.

Mark Compain is a student of military history. Now working for the Returned and Services Association he served in the 2nd Queen Alexandra Squadron of the Wellington Mounted Rifles and went on operation in Bosnia.

He followed in the footsteps of his great-grandfather, Cyril Stone who was with the Wellington Mounted Rifles at Romani.

Mark has studied what happened at Romani.

He believes the battle and the time leading up to it involved all the elements of every type of operation that could be fought on the battlefield.

"The Wellington's were thrown into the line to defend against the Turkish attack which was trying to sweep around from the south cutting off the camp and railhead and were forced to withdraw under fire."

Once the Turks over committed themselves the tide turned.

"The mounted rifles then went on the offensive and pursued the withdrawing enemy."

Mark Compain said the hardened Gallipoli veterans who fought at Romani provided a steady hand for the newbies.

He said it was also a testament to the leadership and battlefield tactics employed by the allies.

"A well thought out defence by the British commander, (General Sir Herbert Lawrence) gave lie to the stereotype that they were muddlers.

"He had a very good appreciation of how the ground would shape the Turkish attack and he designed his plan around that," he said. 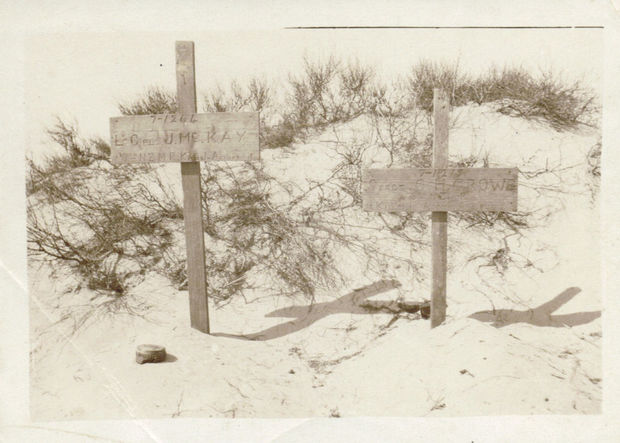 Eighty percent of the allied casualties came from the Anzac mounted division, the New Zealand Mounted Rifles and the Australian Light Horse Brigade.

Forty-six New Zealanders were killed in action, 181 wounded and 10 classified as missing. The Australian casualties were about three times that of New Zealand. 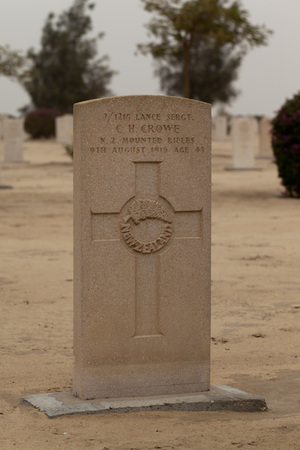 Mark Compain's great-grandfather, Cyril Stone survived Romani. While some of the New Zealand force headed to the Western Front, he stayed in the Middle East fighting in further skirmishes, but eventually succumbed to malaria and was invalided home.

As for my great-great uncle, Cecil Crowe, he did not fare so well. He was killed in action and buried on the battlefield on 8 August 1916.

He now lies in plot A.43 in the Kantara War Memorial Cemetery not far from the Suez Canal in Egypt.

Mark Compain has a theory for why Romani is not one of the well-known battles of World War I involving New Zealand.

"(We tend to) commemorate loss as opposed to celebrating prowess and skill, we are uncomfortable celebrating victory - it's part of the New Zealand character."

Postscript; Cecil Hervey Crowe was born on 3 August 1878, making him 38 when he died. His gravestone records him as 43.