A Japanese soldier who hid in a Philippines jungle for three decades after the end of World War II has died in Tokyo at the age of 91.

Hiroo Onoda had refused to believe the war was over until his former commander returned and persuaded him to surrender. 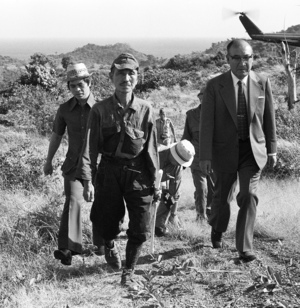 He waged a guerilla campaign in Lubang Island near Luzon until he was finally persuaded in 1974 that peace had broken out.

Leaflet drops and other efforts to convince him the Imperial Army had been defeated were unsuccessful, and it was only a visit from his former commanding officer, who ordered him to lay down his arms, that brought an end to his one-man war.

Mr Onoda was the last of several dozen so-called holdouts scattered around Asia - men who symbolised the astonishing perseverance of those called upon to fight for their emperor. Their number included a soldier arrested in the jungles of Guam in 1972.

Trained as an information officer and guerrilla tactics coach, Mr Onoda was dispatched to Lubang in 1944 and ordered never to surrender, never to resort to suicidal attacks and to hold firm until reinforcements arrived, AFP reports.

He and three other soldiers continued to obey that order long after Japan's 1945 defeat. Their existence became widely known in 1950, when one of their number emerged and returned to Japan.

The remaining men continued to survey military facilities in the area, attacking local residents and occasionally fighting with Philippine forces, although one of them died soon afterwards.

Tokyo and Manila searched for the remaining two over the next decade, but ruled in 1959 that they were already dead.

However, in 1972, Mr Onoda and the other surviving soldier got involved in a shoot-out with Philippine troops. His comrade died, but he managed to escape.

The incident shocked Japan, which took his family members to Lubang in the hope of persuading him that hostilities were over.

Mr Onoda later explained that he had believed attempts to coax him out were the work of a puppet regime installed in Tokyo by the United States.

He read about his home country in newspapers that searchers deliberately scattered in the jungle for him to find, but dismissed their content as propaganda.

The regular overflight by US planes during the long years of the Vietnam war also convinced him that the battle he had joined was still being played out across Asia.

It was not until 1974, when his old commanding officer visited him in his jungle hideout to rescind the original order, that Onoda's war eventually ended.

Asked at a press conference in Japan after his return what he had been thinking about for the last 30 years, he told reporters: "Carrying out my orders."

The Japan that Onoda returned to was much changed. The country he had left, and the one he believed he was still fighting for, was in the grip of a militarist government and, crippled by years of increasingly unsuccessful war, its economy was in ruins and its people were hungry.

In 1974 the country was in the throes of a decades-long economic boom and avowedly pacifist. Mr Onoda had difficulty adapting to the new reality and, in 1975, emigrated to Brazil to start a cattle ranch, although he continued to travel back and forth.

In 1984, still very much a celebrity, he established a youth camp, where he taught young Japanese some of the survival techniques he had used during his 30 years in hiding, when he lived on wild cows and bananas.

Until recently, He had been active in speaking engagements across Japan and in 2013 appeared on national broadcaster NHK.

"I lived through an era called a war. What people say varies from era to era," he told NHK last May. "I think we should not be swayed by the climate of the time, but think calmly."